After a successful mission, the leader of a 2-aircraft pair flew the wrong TACAN course back to the carrier and ran out of fuel. (The other BuNo was 151506). (4)

HC-7 Det 107, based aboard USS King located off the coast of North Vietnam, NSAR. (North Search and Rescue station). Beginning the day at 08:18 they launch the SAR helicopter, Clementine I, for an hour daylight training flight.(6)(12) Returning to the King, Clementine is fueled and prepared for standby. At 10:12 Clementine is scrambled for a search and rescue mission, within three minutes the helicopter launches. USS King is informed that two F-4 aircraft are reported downed approximately 40 miles south; the ship begins maneuvering at various courses and speeds with USS WILTSIE (DD-716) to close area. (12) At 10:16 WILTSIE is detached to proceed to the site of a downed aircraft to the south. (11)

Clementine I, is vectored to within 10 miles of the survivors, at this point they switch their radio to guard channel and obtain a Direction Finder (DF) steer from the downed pilot’s PRC survival radio. (3) Flying another five minutes a pencil flare and dye marker is seen. Clementine I, flares over the pilot, who is sitting in his raft. The crewman lowers the sling, a minute later the pilot is safely aboard the CSAR helo. 10:32 a second flare is observed. Upon approaching the second survivor it was noticed that he was entangled in his parachute shroud lines below water. Clementine flares, crewman AE-1 Smith taps three times on swimmer ATN-3 Farrell shoulder, he jumps. Farrell finds that the survivor is badly entangled with shrouds below the surface. Utilizing his mask and fins, Farrell dives below and cuts the entangled lines. (2)(3) 10:42 pilots of first F-4 recovered by Clem I and are returning to USS King.

Both survivors were in good condition. (2) Clementine crew prepares helo for next flight… unknown to them it would not be long, just 6 hours and another scramble would take place. 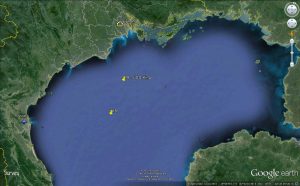