NAS Atsugi base operation phones the duty office of HC-7. 16:25 at the squadron hangar, the SAR crew is notified of a distressed fishing boat. During Typhon SEVEN, four men while digging claims off of Banyu River in Hiratsuka City, Kanagawa Prefecture were washed to sea in their small open boat. (5) Reported to be 2 miles off shore. Approx. 17 miles from the base, the helo crew begins their search. With a sea state of 3 with 12-13 foot swells, the search took 40 minutes. Searching 10 miles of beach and out to sea for 5 miles, they finally sight the adrift boat. 17:40 the crewman drop a MK-25 smoke flare to mark the boats position. Among the waves the boats was easily lost. The rotor wash and sea state caused the boat to overturn. (3) Lowering the sling, 5 minutes hovering over the raft, all four fishermen are brought aboard. Landing at NAS Atsugi helipad at 18:03. (3)(5) No medical assistance was required, the fishermen were taken the Provost Marshal’s office where they received a dinner of chicken and rice. (5) 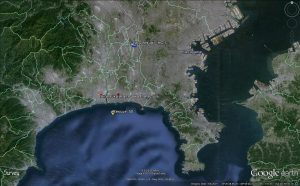 25-November-1968, in a ceremony held at the Fanshuden Gathering Hall, (adjacent to the Meiji Shrine in Tokyo) the four HC-7 crewmen, received the “Japanese Good Conduct Award” (6)