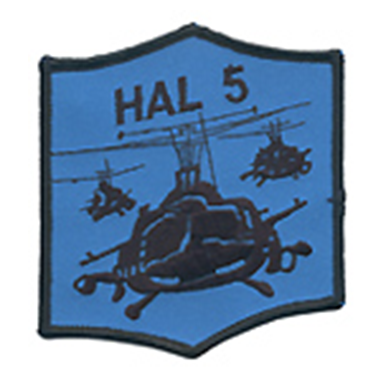 Helicopter Attack Squadron (Light) Five, known by the US Navy designation HA(L)-5 (sometimes abbreviated as HAL-5), was the initial designation of a Naval Special Warfare and close air support helicopter squadron in the period following the Vietnam War, which, along with its sister squadron HA(L)-4 “Red Wolves”, was one of the last two US Navy squadrons using HH-1K “Huey” gunships. In October 1989 the squadron was redesignated Helicopter Combat Support Squadron Special Five (HCS-5), it adopted the name “Firehawks” and it traded in its “Hueys” for HH-60H Seahawk Combat Search and Rescue helicopters. The squadron was deactivated on 13 December 2006

Helicopters have been a vital part our US Naval forces. With the introduction of helicopters the 101st Airborne division started deploying into battle mainly from helicopters as opposed to airplanes. An the helicopter patches are a representation of HA(L)-5 squadron missions and deployments. 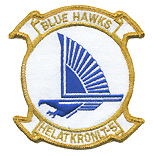