The USS CLARK COUNTY (LST-601) was attempting to unload ammunition. High surf turned the ship sideways where it struck a previously sunk landing craft. A hole ripped in the hull, the ship lost power and went aground parallel to the beach. Three fleet salvage tugs were called and managed to pull the bow off the beach, but were unable to refloat the loaded ship. The USS MARS was asked to unload the ship using its H-46s helicopters and provide support i.e., people, food, pumps. The Mars is anchored off shore. The operation lasted 21-Nov to 1-Dec (5). After refloat the ship was towed to DaNang. (4) 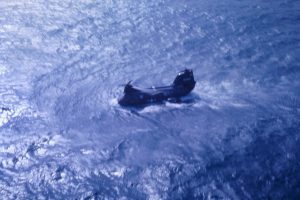 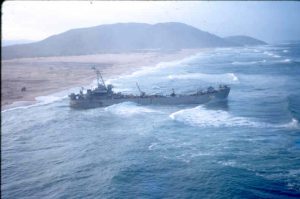 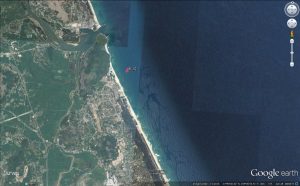 One of the UH-46 helos loses an engine, while conducting salvage operations, off loading ammunition from the grounded USS CLARK COUNTY (LST-601), off the coast of Duc Pho, South Vietnam (4). 13:00 aboard Clark County, the board of investigation is convened regarding grounding and broaching. (9)

From the flight deck of USS MARS, second helo (No. 50) crew, launches at 14:16. (3) Lt Kinsey and Ltjg Benton taxied their helo toward the USS Alamo (LSD-33), in hopes of hoisting aboard. When the helo was about 200 yards short of the Alamo, the pilot LT Kinsey reported water in the cockpit. When the helo was within 30 yards off the port quarter of the Alamo, it appeared to lose power. At 14:28 the helo rolled to port, broke her forward rotors and sank nose down, along the port side of USS Alamo. (7)(8)

On shutdown, the rotor blades struck waves, bent and passed through the fuselage. The helo inverted and sunk 14:29. (4)(8)

Five survivors in the water, 14:45 two survivors were hoisted aboard helo and three others were picked up by USS MARS’s whaleboat and USS Alamo’s LCM. Both the helo and life boats returned to the MARS 14:42 where the survivors were debriefed. 17:39 the USS Bolster has competed the hook-up to USS Clark County. Bolster begins taking strain on tow wire to maintain between 40,000 to 60,000 pounds.