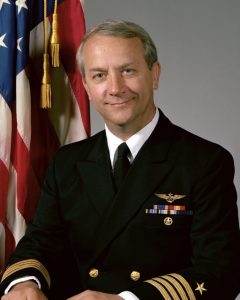 The youngest boy in a family with three older sisters, Edward was raised in Melrose Park near Philadelphia and graduated from Davis & Elkins College with a BS in Psychology and was a member of Signa Phi Epsilon Fraternity.  He joined the Navy in 1960 and as a naval aviator, he specialized in flying Sikorsky SH-3 helicopters conducting combat search and rescue missions.  Among numerous medals received for his service, Edward was awarded the Air Medal, recognized for meritorious achievement while participating in aerial flights during Vietnam.

During his 24 years in the Navy, Edward was stationed throughout the US in Coronado CA, New Orleans LA, Lakehurst NJ, Willow Grove PA, and throughout the world including the Mediterranean and South Pacific before settling permanently in Northern Virginia. Upon his retirement from the Navy in 1984, Edward began his second career as co-owner of the Burke Racquet & Swim Club in Burke, VA.  He served as General Manager from 1990 to 2000.  His great humor and style endeared him to strangers and friends alike, with a close-knit circle of friends from high school and college.  Edward was everyone’s favorite brother, uncle, friend, and in-law.

In addition to his parents, Edward was preceded in death by his sisters Trudy, Wilma, Joan and the “love of his life,” wife, Linda Jean Pencek.  Edward and Linda were married for 41 years.  He is survived by his two sons, Christopher and Andrew, daughter-in-law Cathleen, grandchildren Connor and Ava.