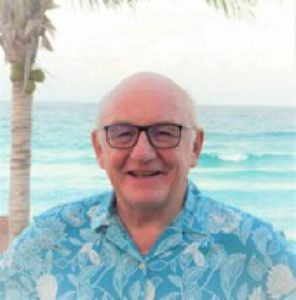 James “Jim” Frederick Ponzo was born on December 29, 1946 to John and Kathleen Ponzo in Evanston, Illinois. On June 16, 2022 in Twin Falls, he unexpectedly passed away and is now with His Heavenly Father.

Jim attended grade school at St Michaels and high school at St Francis in Wheaton, Illinois. At St Francis he enjoyed sports, participated in the glee club and the plays including Brigadoon. His role as MacGregor in Brigadoon helped him embrace his Scottish heritage. With the help of his mother, he set out to perfect his Scottish brogue to accompany his red hair. Jim attended Loras College and graduated in 1969 with a BS in History.

The US Navy was the direction he went after college. He proudly piloted H-46 helicopters, spent time on many ships when deployed, instructed at the US Naval War College and was last stationed in Lisbon, Portugal at the US Embassy as the Naval Attaché before his retirement. Over his 26 year distinguished military career, Jim received many awards and honors. After serving our great country, he retired to Twin Falls, Idaho in 1996 with his family.

April 9, 1983, Jim married Lynn (with Krista right by Lynn’s side) in San Diego, California and in August 1984 they welcomed their son James “Collin” to the family.

He loved to garden and take care of his flowers. His enthusiasm for travel and adventure to see the world was envied by many but that didn’t stop him from filling up his calendar with trips with Lynn and dear friends. He and his son Collin would go to Notre Dame football games, and they loved to watch basketball together. As a three time cancer survivor since 2014, Jim never stopped giving his time and support to his friends and family – especially his grandkids whom he absolutely adored.

His family and friends will remember him as a loving, generous and compassionate man who encouraged everyone to trust in God and to live life! And that infectious laugh of his will be missed too.

Jim is preceded in death by his father, John F Ponzo, his mother Kathleen Ponzo O’Neil and his grandparents.

Services will be held at St. Edwards Catholic Church in Twin Falls, Idaho on June 22, 2022 beginning at 10am with a viewing, followed by Rosary at 10:30 and Mass at 11am. Jim will be inurned at the Idaho State Veterans Cemetery in Boise at a later date. There will be a luncheon at the Parish Hall following Mass for all to share stories about this wonderful man who spent his life touching the lives of so many.

In lieu of flowers, please consider a donation to a charity of your choice in his honor.