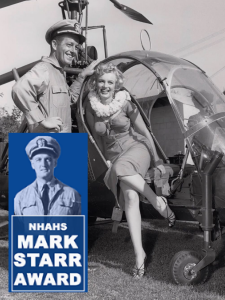 The Mark Starr Pioneer Award is presented annually by the Naval Helicopter Association Historical Society (NHAHS) at the Naval Helicopter Association (NHA) Symposium to recognize those who have significantly advanced Navy, Marine Corps, and Coast Guard rotary-wing aviation.  Awardees are chosen by the NHAHS Executive Committee from a very competitive field of nominees.  In order to reward and encourage innovation, the Mark Starr Pioneer Award seeks to recognize those who helped create or develop the most significant and impactful new ideas, methods, or technology that make our Navy, Marine Corps, and Coast Guard helicopter crews the very best warfighters of their kind in the world today. This award often represents a lifetime of significant achievement in the field of naval helicopter aviation.

It is the mission of NHAHS to gather, preserve and display all forms of Naval Helicopter History.  As a profession, we must always appreciate that the naval helicopter community was built on the innovative thought and the pioneering spirit of a few seasoned aviators and civilians who immediately recognized the value of a new technology few others of the day even tried to understand.  Overcoming what were often substantial professional, political, and bureaucratic headwinds, they changed naval warfare forever.  One of the most accomplished among the early leaders of our beloved profession was Naval Helicopter Association founder, CAPT Mark Starr.

ENS M.R. Starr became a Naval Helicopter Pilot on February 24, 1949 earning Navy Helicopter Pilot Designation Number R-121 and was subsequently assigned to one the first two operational Navy helicopter squadrons commissioned just months before.  Formed from an earlier test and evaluation squadron (VX-3), the Fleet Angels of Helicopter Utility Squadrons 1 and 2 (San Diego and Lakehurst, respectively) were tasked with Fleet support and further developing helicopter tactics, techniques, and procedures.  HU-2, to which ENS Starr was assigned, had the added responsibility of training new helicopter pilots.  When war broke out in Korea in 1950, demand for new helicopter pilots necessitated the formation of a dedicated training squadron, which was formed at Ellyson Field in Pensacola, FL.  LTJG Starr was one of the first instructors assigned to this squadron, known today as HT-8.  In 1952, now a LT, he was selected to form a helicopter exhibition team consisting of three other instructor pilots from Pensacola called the “Rotary Wing Angels” to showcase Navy rotary-wing aviation and booster recruitment at a time when helicopter pilots were in peak demand.  The reputation he earned as a showman with the heart of a teacher stuck with him throughout his lifetime.  Eventually, he became known to some as the “Celebrity Commander” based on the many television and radio personalities he taught to fly.

His career took him to several duty stations.  He commanded several helicopter anti-submarine squadrons and served as Commander, Anti-Submarine Warfare Wing, US Pacific Fleet.  When his time in uniform was over, he founded NHA as a professional organization to promote the development and use of naval vertical lift aircraft in the United States Navy, Marine Corps and Coast Guard in order to advance the story and enrich the heritage of the Naval helicopter community by providing a forum whereby persons in these organizations involved with vertical lift aircraft can interact with each other at meetings and conventions.

He was also instrumental in the preservation of San Diego’s very distinguished aviation heritage.  In 1978 a fire reduced the San Diego Aerospace Museum’s proud collection of aircraft and artifacts to rubble. Retired Navy Captain Mark Starr did more than restore the Museum, he decided that it would be a world class monument to the pioneers of aviation, and it did just that. He was instrumental in raising over $3 million by co-founding the Aerospace Museum Recovery Fund to rebuild the museum and the International Aerospace Hall of Fame at the Ford building in Balboa Park. CAPT Starr spearheaded efforts to select a professional designer to create the magnificent displays that characterize the rebuilt museum where the history of flight is depicted chronologically. The museum reopened in June 1980, where Capt. Starr served on the advisory board until 1985.

After his passing in 1995, Captain Chuck Smiley, the initial Chairman of NHHS (now NHAHS), proposed that the Pioneer award be established in honor of CAPT Mark Starr to perpetuate his legacy of pioneering accomplishments related to aviation and to provide recognition to those persons who have made significant contributions to the Naval helicopter community.  Do you know somebody worthy of the Mark Starr Award?  Email secretary@nhahistoricalsociety.org.  Please provide contact information and a brief description of your nominees accomplishments.  There is no deadline for nominations, but the awardee will be announced in time for presentation at the Return to Honors