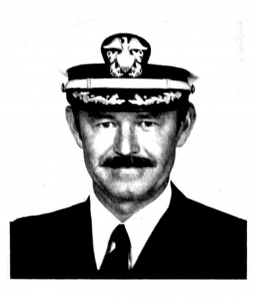 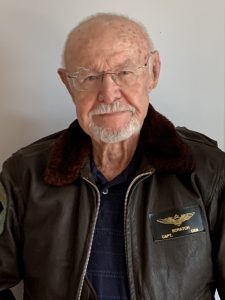 CAPTAIN Paul L. “Scratch” Hryskanich, USN (Ret.) was born in Elmira, NY on 09 July 1930.  After high school, he attended Cornell University for a year when he realized the Navy would pay his college costs. He applied for admission to USC looking forward to mild California weather and was accepted at the University of South Carolina graduating in 1954. After completing flight training at NAS Hutchinson, KS in 1955, Scratch was one of the first nuggets to be allowed to go directly to helicopters, getting his unrestricted Naval Aviator designation (N2771) on February 3rd, 1955. He joined HS-7 and flew H-19’s aboard CVS’s, hovering at 15 feet with 90 feet of hydrophone cable out listening for submarines and claims never to have heard one except USS Nautilus which could be heard at five miles.  A claim to fame from those days was being personally chewed out by RADM John Thach, inventor of the Thach Weave from WWII days. The reason for the interview with RADM Thach is a closely held secret.

After HS-7, he was assigned to Ellison Field as an instructor pilot and then to the US Naval Postgraduate School in Monterey, CA where he completed a MS in Electrical Engineering and flew the station’s H-25 in bad weather when others were reluctant to try. Reassigned to the VP RAG, he discovered his depth perception had worsened and was permanently grounded. Reassigned as a ground pounder at Patrol Wing Eleven, he became the Wing’s SLJO, including responsibility for a summer dance for USNA Midshipmen where he lost only one Mid and a Captain’s daughter.

Scratch then moved to primarily SOSUS station duties including assignment at the US Naval Facility at Bermuda where he was XO and then CO. He spent three years as CO, often acting as the US Representative at local British events and thoroughly enjoying overseas life. He was then unfortunate enough to be assigned to the Pentagon where he was responsible for oversight of 22 Naval Facilities in both the Atlantic and Pacific and was heavily involved in the search for the missing submarine Scorpion. He then went to duty in the Pacific at Ford Island and was able to regain his tan after the Pentagon. Scratch then became Chief Staff Officer at SOSUS Atlantic in Norfolk followed by a five year command tour at SOSUS Dam Neck from which he retired.

Aside from his many Navy awards, Scratch received the highly coveted award from the Virginian Pilot Newspaper for having the messiest garage in Tidewater VA, receiving a $25 gift certificate for a car wash in the process.

After retirement from the Navy, Scratch never had a full time job, focusing instead on worldwide travel with his wife Ginger. Scratch and Ginger, his wife of 65 years, live in Virginia Beach on Lynnhaven Inlet.