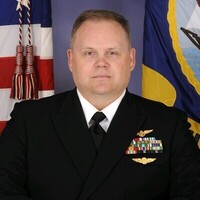 Commander Matthew Mark Matthias, 50, of Leonardtown, MD passed away on June 18, 2022 at Medstar Georgetown University Hospital with his loving family at his side.  Matt was born on June 12, 1972 in Seattle, WA to Joe Matthias and Pamela Frost Klein.  After enlisting in the U.S. Navy upon graduation from high school, and serving for two years with the Fleet Acoustic Sensor Operations Training Group Pacific and HSL Helicopter Anti-Submarine Squadron, Matt attended the USNA Preparatory School in Newport, RI before entering the United States Naval Academy. Matt graduated from the U.S. Naval Academy with the Class of 1997 where he earned a B.S. degree in Aerospace Engineering. After completing 27 years of dedicated service in the U.S. Navy, Matt was honorably discharged and retired in March,2022.

Matt’s aviation career began with training at Pensacola after graduating from USNA, earning his Wings of Gold in 1999. After winging, Matt reported to Helicopter Training Squadron 8 and subsequently served with Helicopter Anti-Submarine Squadron 42. Following a three-year tour on the Commandant of Midshipmen’s staff at the Naval Academy, Matt reported to Commander, Destroyer Squadron 22 and served for several years with Commander, Strike Forces Training Atlantic. Matt enjoyed all of his aviation tours, especially the Counterdrug Operational missions.  Matt’s leadership and expertise proved to be valuable assets to the CENTCOM Senior Staff when he served on the CENTCOM HQ staff. Matt’s 3-year billet at CNIC HQ (Commander, Naval Installations Command) leading the reserve firefighting operations contributed significantly to CNIC’s mission success rate.  Matt received many awards for his dedicated service, among those are the Meritorious Service Medal and the Joint Service Commendation Medal.  Immediately after graduation Matt married his beloved wife, Maria at the Naval Academy Chapel in Annapolis, MD. Together they celebrated over 25 wonderful years of marriage and raised four amazing children. Matt was a devoted husband and father, and spending quality time with his family was his greatest joy.  In addition to his beloved wife Maria, Matt is survived by his four children: Virginia, Elizabeth, Matthew and Zhou, and many wonderful family members and friends.  Memorial contributions may be made to Cornerstone Presbyterian Church in Lexington Park, MD with a note for My Special Treasure, an orphan ministry which was especially meaningful to Matt.

A service will be held at Cornerstone Presbyterian on Saturday, August 20, 2022 at 1:00pm.  Condolences to the family may be made at www.brinsfieldfuneral.com Arrangements by the Brinsfield Funeral Home, P.A.