1985 – HH-65A Dolphins Enter Coast Guard Service:
The United States Coast Guard added 96 Short Range Recovery (SRR) HH-65A helicopters to its fleet to replace the HH-52A Sikorsky Sea Guard. The twin-engine Dolphins operate up to 150 miles off shore and will fly comfortably at 120 knots for three hours. Though normally stationed ashore, the Dolphins can be carried on board medium and high endurance Coast Guard Cutters. The cutters are capable of refueling and supporting the helicopter for the duration of a patrol. Unlike the HH-52, the HH-65A is not able to perform water landings.
The SRR is utilized for Search and Rescue, enforcement of laws and treaties, including drug interdiction, polar ice breaking, marine environmental protection including pollution control, and military readiness. Helicopters carried on Coast Guard cutters greatly enhance surveillance capabilities and mission effectiveness.
The HH-65A minimum equipment requirements exceeded anything previously packaged into one helicopter weighing in at less than 10,000 pounds. HH-65As are made of corrosion-resistant, composite-structure materials. The shrouded tail rotor is unique to the Dolphin. Also a unique feature of the Dolphin is its computerized flight management system which integrates state-of-the-art communications and navigation equipment. This system provides automatic flight control. At the pilot’s direction, the system will bring the aircraft to a stable hover 50 feet above a selected object. This is an important safety feature in darkness or inclement weather. Selected search patterns can be flown automatically, freeing the pilot and copilot to concentrate on sighting the search object.
The TALON deck landing system is utilized for the HH-65. It consists of a helicopter mounted hydraulic probe and a six foot diameter shipboard mounted honeycombed grid. After the helicopter touches down, the probe is activated by the pilot to engage the grid. The probe contacts and locks into the grid by applying and maintaining a hold-down force. To save weight, the probe can be easily removable and can be installed when the HH-65 is deployed to a ship.

A SRR mission analysis began in 2000. An upgraded version of the HH-65, redesignated as a Multi-Mission Cutter Helicopter (MCH), under the Integrated Deepwater Program was programmed. A Service Life Extension Program (SLEP), including airframe upgrades, landing gear upgrade, improved fenestron (tail rotor), updated avionics, increased payload, additional fuel carrying capabilities and increased cruise speed has been completed. The aircraft has been re-engined with the Turbomeca Arriel 2C2-CG giving the HH-65 greater power, better maneuverability and an increased power margin. All HH-65 helicopters were upgraded and designated MH-65C as of 2008. The MH-65Cs variant reflects the installation of armament and a significantly upgraded communications system. Helicopter Interdiction Tactical Squadron (HITRON) Jacksonville was the first operational Coast Guard unit to employ the MH-65C and has a total of 10 aircraft assigned to replace the MH-68A Stingray aircraft.
The current transition to the MH-65D is designed to address obsolete component issues. Two imbedded GPS/inertial navigation systems and two control display units. The upgrade is slated to be complete by summer of 2015. In FY17 the Coast Guard plans to introduce the MH-65E to the fleet. Currently under development, the MH-65E will feature an digital glass cockpit with advanced navigation capabilities. A digital weather radar system and a digital automatic flight control.
The Coast Guard is planning projects to extend the useful life of the HH-65 until 2027.

The following are photos of the HH-65A-MH-65C/D/E Dolphin  helicopter: 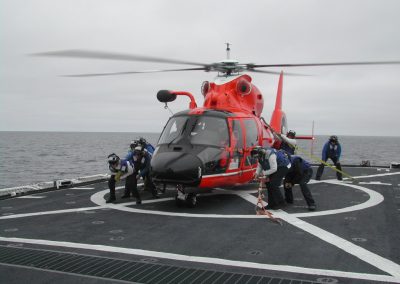 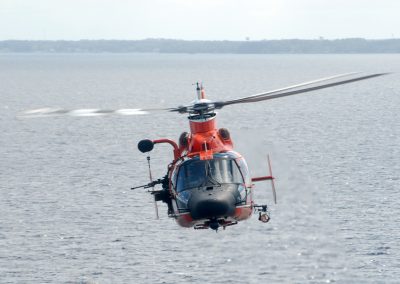 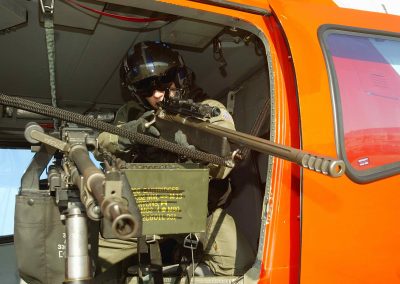 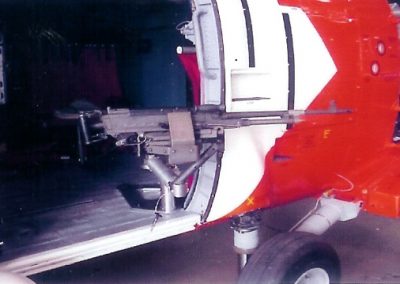 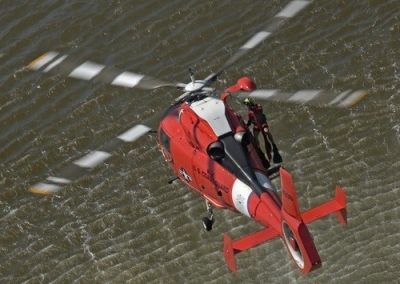