Another Corsair was lost on an Iron Hand mission the day after CDR Barnett was shot down. LCDR Eikel launched two Shrike missiles at an SA-2 Fan Song radar that was emitting about eight miles northeast of Haiphong. LCDR Eikel initiated a split-S maneuver as soon as he launched his missiles but as he was diving vertically towards the ground he felt an explosion and saw two bright orange flashes from SAM bursts. He headed out to sea but a little while later he lost hydraulics, flying controls and engine power and was forced to eject over the Gulf of Tonkin about 25 miles southeast of Haiphong. LCDR Eikel was rescued by a Navy HH-3A helicopter. LCDR Eikel had been shot down in a Skyhawk over North Vietnam during an early tour with VA-93 on 30 August 1968. (5) (HC-7 Rescue No.53)

STATEMENT of pilot Robert Jones (with inserts of crewmembers)

09:11 BIG MOTHER 67 launched from USS CHICAGO, clearing to port. (12) 09:20, While prepositioned off USS CHICAGO on 24 May 1972, and monitoring both SAR COMMON and PRIMARY ATTACK circuits, BEEFEATER 305 called a pilot in the water approximately 330/51 from, channel 20. We immediately vectored towards that position, called RED CROWN for an initial vector and receiv¬ed 340/10, A TACAN fix showed us approximately 310/30 off channel 20. BIG MOTHER 63 off the STERETT gained initial contact and overcrowded cir¬cuits precluded my contacting the on-scene aircraft for some minutes. Con¬tact was finally established with BEEFEATERS 305. In the meantime, HOBOKEN 405 had diverted to pickup BIG MOTHER 63 and lead her in. As we approached the general vicinity I spotted HOBOKEN 405 coming across the nose, turned to follow and asked for a mark on top. As he passed over the wreckage, he made a sharp right turn about 8 miles ahead and I assumed that must be the spot although he gave no oral mark on top. The oil slick and wreckage area was clearly visible from five miles. 09:40, HOBOKEN 405 stated that he saw the wreckage but did not have the survivor in sight. Fortunately, in the initial phase I had heard BEEFEATER 305 call the survivor 050/1 from the wreckage. 09:42, as we passed over the wreckage and turned to 050, the survivor popped a smoke just ahead. 09:43, we made a pass over the survivor, dropped the swimmer, made a 360 degree turn and hovered off to the west about 100 yards. The swimmer unlatched one fitting too free the parachute, got the survivor out of the raft quickly prepared him for hoisting and gave a thumbs up to the pilot. As we moved over the swimmer and survivor, 405 directed a shift to 282.8. Although frequencies should not be changed in the last stages of SAR operation, I shifted, not wanting to lose contact with the RESCAP forces. 282.8 was busy as there was another SAR effort farther south and another possible SAR developing in the area. 09:45, however, by then the swimmer and survivor were both hooked-up and being hoisted aboard. The day prior we found the rescue cable frayed so the decision was made to cut the cable and utilize a quick-splice). The first crewman stated he had cut his hand on the hoist but it didn’t sound bad at the time. Later, I discovered he had caught his hand between the hoist up-limit switch-and the spring stop on the cable and his hand was ser¬iously injured.

We elected to take the survivor to RED CROWN because of available medical facilities vice OSWALD which was 30 miles closer. The survivor: was in ex¬cellent condition suffering only from mild shock. The return and landing was uneventful. The pick-up site was just south of Haiphong approximately 5-7 miles off the beach. First crewman injured hand on hoist (Badly lacerated)

On 24 May 1972, we had a normal quiet preposition prior to hearing HOBOKEN 410 in trouble. At this time I motioned for CANZLER to get into his swim gear. I swung the mini-gun out the door and armed it.. Took the rescue hoist cable from behind the gun and placed it up forward just aft of the ammo canisters. I then hooked up the rescue sling to the big hook of the double hooked hoist hook, I then armed three smokes and had a fourth fully armed and ready to throw in. The swimmer (CANZLER) was ready with swim gear on. I reported the guns armed and the swimmer ready aft to the pilot. We continued to scan the area for survivor, wreckage, land etc. Eventually I sighted BIG MOTHER 63 at 2 O’clock at approximately 6 miles. There was an aircraft ahead of 63 and one circling above. They appeared to be A-7’s. I reported the sightings to CDR WOOLAM (pilot) and LCDR JONES.(co-pilot). The jet was headed obliquely from right to left in front of our nose. CDR WOOLAM made a left turn about 35 degrees heading for the wreckage. The beach was visible at 2 O’clock. LCDR JONES spotted the oil slick as we passed over it. The pilot was located at 050 approximately one mile from the oil slick. Due to the fact that the downed pilot popped a smoke the pilots realized that the wind had shifted so the pilot pulled a hard right turn to line up on the survivor and come into the wind. We flared into 10 KTS and a 10-foot hover. I gave two “easy forwards” to come up to, the survivor. I put the swimmer out at the edge of the chute about 10 feet from the survivor. The parachute was entirely under the water and appeared to still be attached to the survivor. (The pilot was in his raft). The swimmer gave me the thumbs up and I informed the pilot he was OK. We made a very sharp turn to hover beside the survivor. I began letting out the cable until I had two coils on the floor, three coils on my left hand and three on my right hand.

As we came around, we could see the swimmer had the survivor out of the raft and away from
the chute and was signaling that he was ready to be hoisted up. I commenced to talk the pilot over the survivor. About 20 feet prior to be¬ing away from him, I let out the sling and paid out the coils of cable in rapid succession, I called steady over the swimmer and lifted the sling up and swung it over to the swimmer. He rapidly hooked up the pilot and had only minimal trouble hooking himself up, the pilot maintained an excellent hover throughout the rescue. Seeing CANZLER giving me a thumbs up, I reported the same to the pilot as I opened the hoist throttle. As they were coming up the hoist, they were swinging slightly. I lowered the throttle to slow them down and maneuvered the cable to stop the swing. The hoist stop¬ped unexpectedly with their heads at my feet. I checked the hoist for hydraul¬ic failure, for birds nest in the drum, and then noticed the throttle was in the off position. The swimmer was beginning to swing inward so I nudged him with my right-foot and he moved out again. As I eased the throttle gently up the hoist jumped into 200 foot per minute mode vice the 50 foot per minute mode. As this jerked the pilot his arm shot upward. I slammed the hoist throttle down, even as I realized his fingers were going to be smashed between the quick-splice and the base of the hoist itself. I shot out my right hand and brushed his hand away. I failed to get my hand entirely away in time as the hoist stopped about 3/8 of an-inch away from the top the tip of the quick-splice cut diagonally across the last two digits of my right hand. I lowered them a little, put my right arm around them and played out cable as I moved back into the cabin with them, and called “Pilot in the aircraft”, and, “The man seems fine”. We put him in the forward seat, CANZLER gave him a cup of cold water, and after a thorough inspection of the man, I reported to the pilot that the pilot was apparently uninjured and not in shock.

At approximately 0945 we were alerted to a May Day by HOBOTEN 410, we immediately proceeded to the area of the downed aircraft. I put on my swim gear while enroute.,
Upon arriving to the vicinity we were vectored toward the survivor by the on scene RESCAP. At approximately 2 miles the survivor popped a smoke froth which we pinpointed his position and determined wind direction. The pilot, maneuvered the aircraft into a perfect SAR approach upon which time I was given the signal to enter the water. I landed approximately 15 feet from the survivor who-was still in his raft. After checking the condition of the survivor I proceeded to untangle the chute from this raft. I then ordered him from the raft and towed him away from the chute and raft. I then signaled the helo that we were ready to be picked up. As the hoist was being lowered the helo pulled into a 45 foot hover over my position. The hoist hook ent¬ered the water 10 feet from me. I towed the survivor to it and immediately attached his “D”. ring. I then attached my own “D” -ring and signaled the 1st crewman that the cable was clear and we were ready to be lifted. We smoothly lifted to the door of the Helo. At this time the cable lurched and the 1st crewman’s hand was cut by the hoist assembly. We were then pulled into the helo. The entire operation was accomplished with a high degree of professionalism and teamwork.

Jones – BIG MOTHER was returning after several days on a DLG. Hoist cable frayed on pre-flight. No problems, a routine ferry flight at the last minute I didn’t feel right so I decided to have the hoist cable repaired with a quick splice. We heard a “MayDay”, found the pilot with little trouble. There was some speculation that a hovering helo below 40’ could set off a mine. We flew to the nearest ship because of low fuel. My recollection was that we refueled on a LPH. I think we dropped the survivor off but don’t remember for sure. (10) 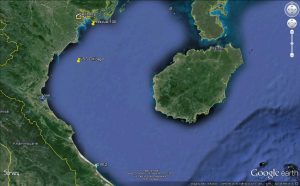