The Coral Sea’s Marine Corps squadron lost an Intruder during a Linebacker strike on the Uong Bi railway yard 12 miles northeast of Haiphong. About five miles prior to reaching the target one of the aircraft was hit by light flak but seeing no apparent damage the crew continued their bombing run. As the aircraft pulled up for a 10-degree run to drop Snakeye bombs the aircraft was again hit by flak. Still pressing on the aircraft was hit for a third time as it released its bombs on the target. As the aircraft headed back out to sea the starboard wing was seen to be on fire and the crew ejected over the sea about 75 miles southeast of Haiphong as the fire burned through the wing spar. They were both picked up by a Navy HH-3A SAR helicopter. (5) 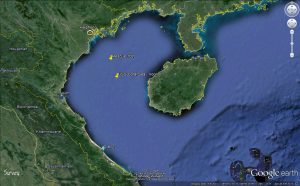