The Atlantic Fleet carrier USS Saratoga arrived on the line on 18 May for its first and only tour of the war. With the arrival of the Saratoga the only available fleet carrier not to have served in Southeast Asia during the war was the USS John F Kennedy. The Saratoga lost its first aircraft on 7 June during a photographic reconnaissance sortie near Haiphong. A Vigilante was taking photographs of anchorages among the islands of Haiphong where foreign-registered merchant ships tied up before offloading supplies in the port. The aircraft began a pop-up maneuver at 3,000 feet to start a photo run when it received an indication of a nearby SAM launch. Lt Cdr Smith broke first to the left and then reversed his course at which point the SAM exploded as it hit the aircraft. The port engine lost power and had to be shut down and after Lt Cdr Smith headed out to sea and selected afterburner on the starboard engine, it also failed. The electrical power failed and the controls froze forcing the crew to eject about 15 miles southeast of Haiphong. A Sea King of HC-7 was directed towards the Vigilante and rescued the crew within minutes of their ejection. (5) 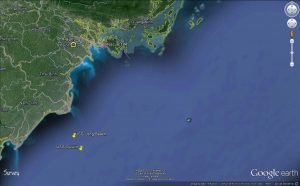 NO RESCUE REPORT 104 on file – SEE Rescue 103 for supplemental details.

“HC-7 Retrieves Pilots from SARATOGA vigilante” “KITTY HAWK FLYER” Vol XI, Number 98, USS Kitty Hawk (CVA-63) Friday June 9, 1972 … The first plane the Saratoga has lost since her arrival in the Gulf of Tonkin. The rescue was the 12th for HC-7 since the beginning of the North Vietnamese offensive. – posthumously contributed by Rich Tinsley (sent by daughter Beth Trynoski)

Jim Keeney – after report (2006)
We launched for our pre-position as soon as we were airborne. Guard went off with a “MayDay”. We flew into Haiphong Harbor Entrance, noting the mines on the way in. Also noticed 2 PT boats racing to try to capture the Pilot. We got to the position of the Pilot and all HELL broke loose. LT Kelly flared and Tinsley tapped me OFF, I went. I hit the water hard, we must have been doing 20 knots, I came up. It was loud with all the firing at us, the pilot was OK, we were really close to a bluff and a gun site. I could see the NVA on the rocks. Got the pilot out of the raft and sunk it. Pulled him as far away from the bluff as I could while waiting for the helo to return. As the helo turned I started splashing the water to be seen. The helo came in and I was able to get the pilot and myself onto the hoist cable using the snap links. The helo never had to stop, as I gave Tinsley THUMBS-UP. We were dragged and pulled-up on the fly….