A section of Phantoms was flying a BARCAP mission over Hon Nieu island near Vinh during a dawn attack on a merchant ship. Lt Cdr Cash was jinking at 1,000 feet in an attempt to throw the anti-aircraft gunners off their aim when his aircraft was hit by 23mm flak. The port wing caught fire and fuel streamed from the aircraft as Lt Cdr Cash headed out to sea towards his carrier. About 100 miles out to sea the pilot eventually lost control as the hydraulic system began to fail completely. The crew ejected safely and were quickly picked up by a Navy helicopter. Lt Cdr Cash and his NFO. (5) 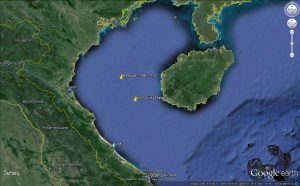