A section of Corsairs was flying a night-time armed reconnaissance mission during which a POL storage site was attacked at Da Thit, some 35 miles southwest of Thanh Hoa. Lt Cdr Tolbert’s aircraft was hit in the port wing by AAA as he approached the target at 3,500 feet. He jettisoned his ordnance and headed for the coast. The engine may have ingested some debris as during the flight back to the carrier the aircraft’s engine surged and the fuel flow became erratic. When the Corsair was about 40 miles from the coast flames were seen coming from the jet-pipe and the engine flamed out. The pilot ejected and was rescued by a US Navy helicopter. Clarence Tolbert was shot down and killed during an armed reconnaissance mission on 5 November 1972. (5) Clarence Tolbert’s remains were returned by the Vietnamese on 3 November 1988. (5) 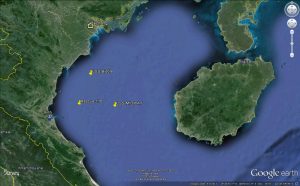 At 22:35, 23 July 1972 (22:43) (12) we launched from the USS BIDDLE to locate a downed pilot. We arrived on scene at 23:00. Voice contact was established about seven miles from the survivor. I had turned on my spot-light so the survivor could identify me. He vectored us in using our spotlight as a guide. At five miles, he fired a MK-79 pencil flare, which we spotted. About one mile out, he lit off the night end of a MK-13 day/night flare which we saw. Then we spotted his helmet with our spotlight. We passed over the survivor and dropped a MK-25 marine marker. We circled around and lowered the swimmer, who checked the survivor and hooked him to our hoist. We hoisted the survivor and swimmer aboard (23:10). We returned survivor to the USS MIDWAY, at 24:00.15 hours, survivor was carried from helo on stretcher. (3)

At approximate 22:30, 23 JULY 1972, (22:43) (12) we received word to launch BIG MOTHER 64, from the USS BIDDLE. We were off the deck at 23:35. Immediately after launch, we were, told that a pilot was down, and to contact CHAMP 406, who was the downed pilots wingman and ON-SCENE-COMMANDER. After contacting 406 we were given vectors of 180 degrees/14 NM from RED CROWN (USS BIDDLE). This was reportedly the downed pilot’s approximate position. While en-route to this position, there was much confusion over the radios as to what frequencies to use. It seemed that too many people (ON-SCENE-COMMANDER, RED CROWN, and SCHOOL BOY) were trying to control the initial stages of the SAR effort. RED CROWN then instructed us to come up GUARD, and this eli¬minated much of the confusion, as then we were in better direct contact with the ON-SCENE-COMMANDER and the survivor.

Upon reaching the initial position given us (180/14) LT RAMEY instruct¬ed the ON-SCENE-COMMANDER to have the survivor pop a smoke and we then com¬menced a search pattern. We were then given a revised position of 180 degrees / 2 miles by the ON-SCENE-COMMANDER and RED CROWN, and we proceeded to this position. We were also informed that the downed pilot had some back injuries, but the extent of his injuries were not known,

En-route to the new position we had good voice communications with the survivor. Upon arriving at our position, LT RAMSEY began using the flood light to help the survivor vector us in. The survivor spotted our light and began to vector us in. When we were close to his position he popped a (MK-13 day/night distress signal) which we immediately spotted. When we were over his position, PAUL dropped a MK-25 smoke to help mark him and we proceeded around for the pick-up. Once over the survivor in a 50′ manual hover, WILSON was lowered on the hoist to assist the survivor. PAUL voice controlled our position while WILSON got the survivor ready. We were positioned to the left of the survivor while WILSON got him ready, and our hover was held between 50 and 60 feet, I monitored the radios, and our altitude and power for the pilot. LT RAMSY maintained a good steady hover, and when WILSON gave PAUL the signal that he was ready, RAMSEY pos¬itioned over the pilot. At this time the survivor and WILSON were hoisted into the aircraft. The pick-up was made at 23:10, approximately five minutes after the survivor was spotted.

We then proceeded to the USS MIDWAY with the survivor at approximately 23:50.

The main problem encountered during the effort was confusing radio com¬munications during the initial stages. Once good communications were est¬ablished with the ON-SCENE-COMMANDER and the survivor, everything went pretty smoothly. WILSON reported some difficulty using the Air Force type rescue hook on the hoist.

We were stationed on SAR aboard the USS BIDDLE. At approximately 22:30 we were launched from the BIDLLE. We were told that a pilot was down in the water. At that time ADJ1 WILSON (2nd Crewman) proceeded to get in to his swim gear. I got smokes ready and rigged the hoist with the horse collar and a light. Then I stationed myself at the cargo door to look for the downed pilot. After we sighted the downed pilot, I dropped a smoke to mark his position. Then we came around I lowered the swimmer on the hoist. When the swimmer was in the water and had the survivor, we moved left end back. When I got a thumbs up from the swimmer we moved back over and picked them up. Once inside we broke hover and headed for the USS MIDWAY. ADJ1 WILSON and I then removed the pilots vest and survival gear and placed him flat on his back on the aft troop seat. He complained about his back. The rest of the flight back to the MIDWAY was uneventful.

After launch from the “BIDDLE” we were briefed that a pilot had ejected and was in the water. I stripped from my flight gear and donned my swimmers harness and vest. After locating the downed pilot, we dropped a MK-25 smoke to mark his position; then came back around for our pick-up. The first crewman rigged the hoist with the horse collar and a light, and I entered the horse collar, to be lowered into the water to assist the pilot. Upon reaching the pilot, he informed me that he had a back injury, and that there were junks in the area. I placed the horse collar around him, and hooked my snap ring on the swimmers harness to his snap ring installed on his torso harness. After attaching the hook on the cable to my snap ring, I signaled the 1st crewman we were ready to come up. The helo, which had moved off to the left to reduce rotor wash, then repositioned over us, and the lst crewman hoisted us up to the door. I had briefed the pilot in the water, as to what to expect when we got to the door, and to hold on to me as I positioned him for entry into the helo. With the aid of 1st first crewman, we pulled the pilot into the helo, re-moved his floatation gear and torso harness, and after placing him prone on the aft troop seat, wrapped him in blankets and tried to make him as comfortable as possible. The return to the USS MIDWAY was uneventful.

Once again, as in previous rescues, the Air Force type hook installed on the high-speed hoist, with the brush type deflector, presented a pro¬blem getting the snap ring hooked up. Had the rescue been opposed, and time being critical this could have been the determining factor as to successful rescue.