The 523rd TFS deployed from Clark AB and was attached to the 432nd TRW at Udorn on 9 April for seven months. The first aircraft lost by the Squadron was abandoned over the Gulf of Tonkin about 60 miles northeast of Vinh when it ran out of fuel returning from an escort mission. The crew were rescued by a Navy HH-3A SAR helicopter. (5) 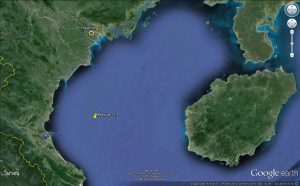