One of the two Phantom squadrons on board the USS America on its third and final combat cruise was VMFA-333 of the US Marine Corps. This was the only occasion when a Marine Corps Phantom squadron had deployed on board a carrier for duty in the war. On 11 September VMFA-333 provided a CAP flight of two F-4Js for a major strike on the Co Giang SAM assembly depot. During the mission, the CAP flight engaged several MiGs and Maj ‘Bear’ Lasseter, the Squadron’s executive officer, and Capt Cummings shot down a MiG-21 and damaged another near Phuc Yen airfield. The air battle had left the pair of F-4s short of fuel and they had to fly directly over Haiphong on their way to the Gulf and a waiting tanker. The air began to fill with SAMs and flak bursts and, despite evasive action, Maj Lasseter’s Phantom was hit by an SA-2 at 15,000 feet damaging the wing and causing the aircraft to burst into flames. Eventually hydraulic failure led to loss of control and the crew ejected over the Gulf about 35 miles southeast of Haiphong, from where they were rescued by an HH-3A of HC-7 operating from the USS England.

Maj Lasseter’s wingman was also hit as he flew over Haiphong on the way out to sea. Capt Dudley’s aircraft was hit by flak in the wing and fuselage causing a massive fuel leak. The engines flamed out from lack of fuel when the aircraft was about 45 miles south of Haiphong and the crew joined their colleagues in the Gulf and were rescued by the SAR destroyer USS Biddle. All four men returned to the carrier with barely a scratch to celebrate the only all-Marine Corps MiG-kill of the war. Maj Lasseter took command of VMFA-333 on Christmas Eve when Lt Col Cochran was shot down. (5) 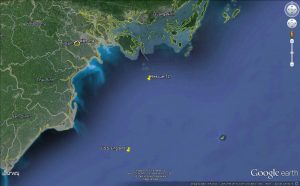 On the afternoon of 11 September 1972, at approximately 1715, 71 was launched off the USS England to cover a strike from the USS America into the Hanoi-Haiphong area. At approximately 1820 we heard a May-Day call from a distressed plane, who was hit and heading seaward. We attempted to get good vectors from the controlling ship to step-up a rendezvous with the distressed plane. The ship reported our position looked good, we saw one aircraft at 1130 high and what appeared to be an ejection from a second. We lost sight of the chutes but headed in the general direction of the distressed aircraft flight. A few more vectors from the ship and we arrived on the scene to be greeted by 61 that was in the process of picking up the second pilot. Everyone breathed a sigh of relief when both pilots were aboard 61 headed for the controlling ship. We relayed from 61 to the controlling ship that both survivors were aboard 61. At this time Rescap came up and asked for the side number of the survivor’s aircraft which was relayed to 61.

Rescap reported that there was a second downed plane, and the SAR effort continued with 61 heading for the controlling ship. We set up a search pattern in the area reported to us by the ship. Rescap was relieved by another aircraft and assumed as the on-scene commander. The second aircraft spotted the two survivors which at this time we were unable to get a positive vector from the controlling ship. “Hard Charger 15” had been launched from another ship and was heading in the same area. We tried a number of times to get an ADF out on the second aircraft with no luck. It seemed about now everyone airborne in the Gulf of Tonkin was trying to render assistance. The on-scene commander tried switching frequencies to get some of the people off the net but everyone was switching right along.

Dusk was rapidly charging upon us and still there were no survivors in sight. Our fuel state was now below 1 hour. Finally, we spotted a pencil flare ¼ mile at 2 o’clock. A quick descent from 1000 feet was made and at 10 feet and 10 knots over the survivor the swimmer was dropped, 1914. I made a tight right hand turn and saw a second flare go off. We pulled into a hover over the swimmer and survivor and quickly pulled both aboard. The second survivor was now at 10 o’clock, 300 yards. By the time the crewman said both swimmer and survivor were coming in the aircraft, I saw “Hard Charger 15” pulling into a hover over the second survivor. I remained in the area a little longer to make sure “Hard Charger 15” didn’t have any problems. My fuel state was rapidly approaching critical; I climbed to 500 feet and established communication with the controlling ship and proceeded to them. I had a “Charlie” on arrival and landed uneventful, with 20 minutes of fuel indicating.

The rescue of all four survivors was successfully accomplished. Communications, one of the most important aids in any rescue was badly hampered by all of the “well wishers” and enthusiastic helpers. I believe in an SAR effort everyone not directly concerned should refrain from cluttering the air.

We were orbiting our preposition point when we heard a “May-Day” call. We began to head north and received vectors from our controlling ship. Another Big Mother aircraft was in the area and when we arrived on the scene Big Mother was just completing the pick-up of two pilots who had ejected after being hit by a SAM over the Haiphong area.

We began to head south in company with the other Big Mother when I heard a guard transmission from the on-scene commander requesting the aircraft side number of the pilots who had just been picked up. We relayed this information to him and he informed us that he believed that another aircraft had gone down in the area. We reversed course and proceeded toward the second SAR area.

We received several vectors from the on-scene commander but coordination was difficult due to the amount of communication on the SAR frequencies. It was becoming dark and our fuel state was getting low when we spotted two flares ahead, fired by the downed pilots.

We transitioned into a hover over the nearest survivor and dropped a swimmer. While he was preparing the pilot for hoist pick-up another rescue helo arrived on the scene (Hard Charger 15) and made an approach to the other pilot.

We picked up one pilot and the other helo picked up the second. We then proceeded to the USS England where we made an uneventful night landing with 20 minutes fuel remaining.

Both pilots were uninjured and were returned to the aircraft carrier the next day.

Problems: 1. Bad communication with the controlling ship due to distance to SAR
Scene. 2. Lack of coordination with on-scene commander due to heavy communication traffic on SAR frequencies.

At about 1900 we commenced a search for the downed pilots. About 1910, I spotted a flare at 1 o’clock and about 3 seconds later another at 2 o’clock. We made and approach on the smoke at 2 o’clock. As we were over the survivor, I placed ADJ1 McENTIRE into the water. We made a tight right-hand race track pattern to speed the recovery time due to low fuel state. The swimmer and survivor were then brought aboard. We then returned to the controlling ship.

At about 1915 I entered the water to be of any assistance to the downed pilot. After giving the first crewman AO3 Cowley a thumbs up signal meaning I was all right, I swam to the survivor’s raft. I checked him over and made sure he was not injured, I removed him from the raft. I sank the raft and swam away from it. I signaled for the helo which was already making an approach due to low fuel state. Both the survivor and myself were brought aboard the aircraft which then proceeded to the controlling ship,

Gene Gilbert (10)
Vectored to site by Rescap – some confusion over identity of downed pilot. Left area without sighting survivor.

Radio traffic indicated that there was still a survivor in the water so we returned to the area. Pilot popped a flare. Put swimmer in the water and picked up survivor, he was OK. We were VERY low on fuel so got a HIFR from a destroyer and RTB.

RTB – Returned to Base