A formation of Corsairs from the USS Kitty Hawk attempted to bomb a bridge about 25 miles south of Vinh but were frustrated by bad weather. The flight headed north and flew along Route 1A looking for a target of opportunity and came across a bridge near Ninh Xa, about 10 miles south of Vinh. As Lt Robb pulled up from a 45-degree dive attack, his aircraft was hit by flak and caught fire. He turned out to sea and managed to fly about 20 miles off the coast before being forced to eject when he lost control. As he was descending in his parachute, he saw his Corsair dive into the sea below him and noted that the entire tail section had broken away. (5) 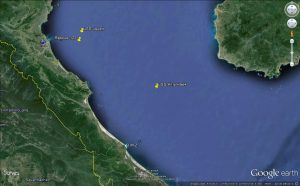 “As I approached the destroyer, my engine started to act up again and I noticed even brighter flames. That was it. The aircraft exploded. It flipped over. The nose went – I can’t say which way. I was up against the top of the canopy as the aircraft continued its own maneuvers, but I was able to get a hold on the handle and ejected.” Robb (14)

We were milling around waiting for dinner when “Man the pilot rescue detail” was announced over the 1 MC. Not sure whether the ship was conducting a drill or that there actually was an aircraft in trouble; we began to make our way back to the helicopter. Shortly thereafter, “Flight Quarters, SAR Emergency” was sounded and we double-timed to the helo. Upon entering the bird, I heard BRAKE say to HARLOW “That must have been the big splash I saw, like someone dropped an anchor into the water.” Then while climbing into my seat, I saw the chute and noted the direction, 020° on the standby compass, it looked about two to three miles away. We got the engines started almost immediately but our engagement and launch were held up as the ship was in a hard turn to find the wind. I called them on the UHF and told them to steady up and give me 15 knots and I’d go, which they did.

After launching, I called for vectors and was told to stand clear as Copyright 13 had the survivor in sight and would make the pick-up. This was followed almost immediately, by “That’s negative, that’s negative, Copyright 13 does not have the survivor.” I turned to 020 and proceeded to where I thought he was. At the same time, the co-pilot started dumping fuel so we would have a little extra power available when we found him.

Not more than a minute or two later BRAKE, looking out the port personnel door, announced that he had the survivor at nine o’clock. The co-pilot and I both looked out in that direction as I started a port turn. The co-pilot stated that he also had the survivor in sight and instructed me to increase my turn. Meanwhile BRAKE had stationed himself at the aft cargo door preparatory to jumping in the water to aid the survivor. By this time, I had completed about 270° of turn and HARLOW, also at the aft cargo door, announced that he had the survivor at two o’clock and began directing me to him. At this time, I saw the survivor who had ignited his smoke flare, and I altered my approach so as to be into the wind on final.

I hovered over; the survivor dropped the swimmer and moved left to keep them in sight and to allow the swimmer to assist the survivor without the interference of the rotor wash. When the swimmer indicated he was ready to be picked up HARLOW again directed me back into position and the pick-up was made. At this point, I noticed the back-up helo proceeding up our starboard side in very close proximity – I called him and asked him to stay clear. My attention was then directed back inside of the helicopter to ensure everyone was aboard and ready for forward flight. As I broke hover, I saw that the back-up helo had turned in front of us, and we were required to fly through his rotor wash, again, I asked him to stand clear.

On returning to the ship, we were asked if the survivor had any injuries, if not, they wanted us to remain airborne while they recovered his raft. We stayed airborne about ten additional minutes at which time the survivor was presented with the traditional bottle of Very Cold Duck – which wasn’t very cold. On landing, the survivor was taken immediately to Sickbay.

1. The helicopter should be used as the primary rescue vehicle when available.
2. When true winds are minimal, tire should not be wasted searching for ideal launch winds, sufficient winds to get the helicopter airborne are all that is required.
3. Other aircraft in the area should stand well clear of the rescue helicopter, the crew is busy enough without having to worry about a mid-air.
4. Bring the survivor back on board immediately for medical attention – by trained medical personnel. These recommendations are made with hindsight and are not intended to be criticisms.

At approximately 1715 on 19 September 1972 on board the USS JOUETT, DLG-29, word was passed over the 1 MC to “man the pilot rescue detail”. Moments later also over the 1 MC “SAR EMERGENCY” was passed. By this time we were on the run from the wardroom to the flight desk. Donning our survival vests and strapping in we completed the checklist and were ready for lift. We had 15-20 knots of wind straight down the deck but the ship was maneuvering trying to find better winds. Finally, after what seemed a long time we received a green deck. While waiting to launch the pilot saw the rescuee coming down in his parachute and thus got a rough estimation of his position. Immediately after takeoff en-route to that position, the ship told us to stay clear that Copyright 013 had a visual on the survivor. Immediately after that transmission, Copyright 013 came up and said they only had some debris and not the survivor. About this time, I spotted the survivor at our nine o’clock position. We immediately entered a left turn but I lost sight of him between the waves. Just as we completed our 360° the first crewman spotted the survivor and smoke flare at our five o’clock position. We turned approximately 180° to the right where we saw the survivor and were headed directly into the wind to pick him up. We approached him and came into a low hover and dropped our swimmer to assist him. Then we moved off to the left and waited for a thumbs up from our swimmer which took less than a minute. We moved back in over the survivor and our swimmer and picked them back up. We then proceeded to the JOUETT to recover. En-route, the JOUETT asked if we could stand off for 10 minutes or so while they maneuvered to pick up some debris, life raft, parachute, etc. Since the rescuee appeared in good condition, we agreed.

In the future, I recommend that we recover as soon as possible. Neither the crew or the rescuee is in any position to determine how slight or great his injuries are as long as there is no profuse bleeding or obviously broken bones. However, there could be severe internal injuries and shock that require immediate medical attention. After about 10 minutes of starboard delta we recovered and the survivor was taken to sick bay on board the JOUETT. Approximately only 30 minutes elapsed from SAR emergency being passed until the rescue was terminated successfully.

At approximately 17:00 while standing on the flight desk of the USS JOUETT, second crewman Nick BRAKE and myself were looking out over the horizon when we saw a plane hit the water with a tremendous splash. It looked to be about 6-8 miles away. The ship immediately called “flight quarters” to launch the Big Mother.

We jumped into our bird and got in our flight gear and made systems checks while the pilots started the engines and the ship turned into the wind. We were off the deck in what had to be less than three minutes. As we were lifting, Mr. KOCH saw the chute coming down, perhaps 1 mile to the port side of this ship. An H-2 Lamps bird was in the air and heading for the survivor also and told us via radio that he could handle it. Mr. KOCH corrected him and assured the role of primary helo and advised the H-2 to please stay clear. I don’t think the H-2 driver had any intention of staying clear because at that time he said he was approaching the survivor and began to flair on some floating garbage which he no doubt mistook for the survivor. While he was busy rescuing garbage, we had the pilot in sight and I began talking Mr. KOCH in closer to him. BRAKE was ready and in the door with his swim gear on. Upon getting to the proper altitude and speed, I put in my swimmer. He made an excellent water entry not more than 10 feet from the survivor. As he swam to the pilot, Mr. KOCH moved left so that our rotor wash would not hamper our swimmer. No sooner had we moved left, than BRAKE gave a thumbs up for a pick-up. As I talked, the pilot back over the man in the water, I was letting out cable. The pilot maneuvered our aircraft exactly where I told him which greatly simplified things. I swung the hook into BRAKE’s hand, he snapped onto the hook, pilot in tow and began a fast ride up the cable as Mr. KOCH smoothly moved into forward flight. Upon getting the man inside and unhooked, I began to help the pilot out of his gear while BRAKE opened a bottle of champagne, which we keep on ice for just such an occasion. Our survivor LT WARREN ROBB got the first drink and passed it around. When we landed on the JOUETT, he shook hands with myself and the rest of the crew and thanked us. I think he was glad to be back.