A Corsair from the USS Oriskany had to be abandoned during a weather reconnaissance flight when the aircraft’s engine failed. The cause was suspected to be a failure of the engine accessory drive. (5) 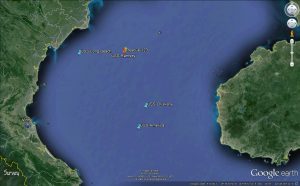 On 20 September we launched from USS AMERICA at approximately 0745 on the usual exchange of assets. At approximately 25 miles from the SAR picket ship we heard a “MAYDAY” call from an aircraft experiencing difficulties in engine operation. He reported seeing the picket ship before ejection. We were immediately vectored to the scene. Once the survivor was spotted we made a routine NATOPS pickup.

We launched at 0750 from USS America to proceed to USS Long Beach. About 25 miles from our destination, we received a report over the radio that an aircraft had lost engine oil pressure. Shortly afterwards, we were informed that we would make the pickup and were given vectors. As we neared, the spot we were told that the survivors about 100 yards off the USS RAMSEY’s bow. I spotted the survivor and we turned to position the approach into the wind. The survivor popped a day smoke. We were unable to do a 10’ and 10 knot swimmer drop because of the position of the RAMSEY. Consequently, we pulled into a 10 foot hover, dropped the swimmer and then backed up and to the left from the survivor. We waited in a 40 feet hover until the swimmer was ready for the pickup. Then our 1st crewman talked us over the two in the water and we made the rescue. After the survivor was aboard, our crewman reported him in fine shape. We flew to the USS LONG BEACH and dropped the survivor off.

No problems were encountered and the rescue was unopposed.

We still weren’t sure if we would be the primary helo. Still receiving vectors, we were informed slightly after that we would make the pick-up and that the survivor was approximately 1500 yards ahead of the USS Ramsey.

As we were approaching the ship, we saw a day smoke popped by the survivor. We came around for an ___________ approach and I positioned myself in the cargo door. We made a very slow approach to the survivor to avoid any possibility of overshooting – the ship being very close at this time. The water entry was good and I gave a “thumbs up”. I proceeded to swim approximately 10 feet to the survivor using an underwater breaststroke to check for shroud line entanglement. As I surfaced, I asked the pilot if he was feeling ok. He said he was fine and after one more dive, I was assured he was completely free of his chute and all shroud lines. Meanwhile, the halo has moved left and after of our position and was waiting in a hover. I elected to the survivor away from his raft rather than sink it, and at that time, the halo started moving in for the pickup. I have no problem attaching the pilot’s snap link to my harness but then started having trouble with my facemask. During my preparation, I have forgotten to adjust the strap and the mask kept sliding down, covering my mouth and inhibiting my breathing. ACE Hoover, the 1st Crewman swung the cable past us and dragged it through the water straight to us. My facemask was really becoming a hindrance to me during final hook-up so I placed it on my forehead and hooked up underwater without the facemask having no further trouble. Once attached, we were lifted into the hole and started moving forward. We reported to our pilots that the survivor was feeling fine, and proceeding to the USS Long Beach.

The whole operation was under a very relaxed atmosphere and all parties involved did an excellent job. Too bad, they aren’t all this easy.