After nightfall yet another Corsair was lost on the 10th. Lt Lotsberg was the number 2 in a section of Corsairs on a road reconnaissance mission along Route 1A south of Vinh. The section discovered a truck about seven miles southeast of Ha Tinh but Lt Lotsberg’s aircraft was hit by 23mm AAA just as he was about to roll in on the target. He headed towards the sea but his flying controls froze almost immediately and he ejected at 15,000 feet just off the coast 90 seconds after being hit. He was later rescued by a Navy helicopter. (5) 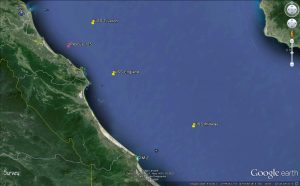 At 0150, the morning of 11 November 1972, we were awakened by the Commanding Officer of the USS England, (DLG 22). He reported that a pilot was down off the coast of North Vietnam and flight quarters were being set. My copilot, Lt Mike Ekdall proceeded to the helicopter while I phone the ship’s evaluator to verify the rescue and to gather additional information. My copilot had completed the startup checklist and No. 1 engine by the time I reached the aircraft. An eventful lift was made at approximately at 0200H and upon reaching 800 feet, we leveled off and I turned the controls over to my copilot. I checked with the controlling authority (USS England), they passed to us a vector of 306 deg/ 36 miles. I switch to our SAR common frequency and contacted the On-Scene-Commander Champion 413. He then informed us of the situation of the downed pilot. I gave him my position and requested a vector from the surface controller in order to gain a visual on the rescue helo. After 10 minutes of flight, we sighted the On-Scene-Commander and proceed to him for the rendezvous. He immediately reversed his course upon sighting the lights of the helo in order to escort us to the downed pilot. We spotted the para- flares being dropped over the survivor at approximately 15 nautical miles. I notified the On-Scene-Commander that we spotted his flares and to notify the survivor to be ready with his night distress smoke and strobe light. With the strobe light of the survivor clearly identified, I had my copilot to dump our fuel down to 1100 pounds in each tank. I attempted to contact the survivor on Guard but without success. At approximately 5 NM from the survivor, we sighted a distress flare at our twelve o’clock position. When I estimated our position to be about a mile from the survivor, I broadcasted on Guard, to have the survivor pop another smoke. When the smoke appeared on my nose, I started a 70 knots approach from about 200 feet with the Bar Alt engaged and my copilot monitoring the gauges. With the para-flares overhead, the survivor was easily sighted during the transition to a 40 foot hover, approximately 75 feet from the survivor. My first crewman, AE3 Ankney, directed me over the pilot, my swimmer AE3 Cady prepared to lower the hoist. Once established over the survivor, the swimmer was hoisted down into the water and a smoke was deployed to clearly mark his position. I then slowly moved the helo back and to the left to allow the swimmer freedom to prepare the pilot for pickup. Without warning, the once illuminated horizon went pitch black for the A-7 para flares had extinguished and his supply was depleted. With the immediate transition from daylight to total darkness, I found myself unable to maintain a stable hover. Vertigo had affected my copilot and I in a manner we never experienced before. As the helo began to descend towards the water, both my first crewman and copilot yelled “Altitude” as I read 10 feet on the radar altimeter.

Mike and I simultaneously pulled in a large amount of collective while I attempted to level the aircraft’s nose attitude. While climbing thru 100 feet, both gyro’s indicated eight degrees nose up, with the airspeed reading zero knots. I then released the bar alt button and slowly lowered my nose approximately 3 to 5 degrees below the gyro’s horizon in an attempt to pickup air speed. Once established in a steady climb to 500 feet, I gathered my composure before making another attempt. While at 500 feet, I informed the On-Scene-Commander of my vertigo problem as I started a shallow turn to the survivor. In order to establish some semblance of a reference while hovering, I passed upwind over the pilot in the water and dropped two smokes approximately 75 to 100 yards from the position. Once positioned into the wind, I descended to 150 feet and attempted another approach to the survivor. During the controlled descent, I turned on the movable spot light and hover lights in order to maintain a hover as much as possible and to keep the pair in the water in sight. Once established in a hover, it was extremely difficult to maintain my position for, I soon found myself over-correcting for movement of the aircraft.

After approximately 10 frustrating minutes, we were finally able to retrieve both swimmer and pilot. With the pilot safely aboard our aircraft, we were given a vector 066⁰/05 miles, which was the USS TRUXTON (DLGN-35). The condition of the pilot was determined satisfactory prior to our approach for landing aboard the USS TRUXTON. Still feeling the effects of vertigo, I decided to turn on my flood and hover lights upon reaching 100 feet during the approach. With my co-pilot, a uneventful landing was made. This night rescue clearly demonstrates the necessity for night training and operable doppler equipment.

At 01:50 on the morning of 11 November 1972, I was asleep on board the USS ENGLAND (DLG-22) where I was on a 15-minute ready alert as the co-pilot of Big Mother 60. The telephone rang and we were informed that there was a SAR alert in progress for a downed pilot. I inquired and found that he was feet wet, 5 or 6 miles from the beach, and some 38 miles from the ship. The pilot, LT James SPILLMAN and I dressed and prepared to launch.

I was flying the aircraft at this time. At approximately 5 miles from the scene, the On-Scene-Commander told the downed pilot to pop a night smoke. We immediately spotted the flare and proceeded toward it. During this time, the immediate area was being well lit by the para-flares. At this time, we switched to guard to try to establish communications with the downed pilot with negative results. We proceeded to the area where the first smoke was seen. When we felt that we were close to the area we asked for a second smoke.

Once again, we immediately sighted it judging our distance to be approximately 1 mile. The second smoke was evidently extinguished as we lost sight of it almost immediately. LT SPILLMAN then took control of the aircraft. The On-Scene-Commander then told the downed pilot to light his strobe and we had considerable difficulties sighting it. When we did sight it LT SPILLMAN transitioned to a manual hover. As we were in a hover, the last para-flare was dropped. The swimmer AE3 CADY was lowered on the hoist by the 1st crewman AE3 ANKNEY. Upon entering the water he freed himself of the hoist, a smoke was dispersed for marking the position of the survivor, and the aircraft was moved to the left to avoid excess rotor wash.

The final para-flare burned out and acute vertigo was experienced by both LT SPILLMAN and myself. After vainly trying to acquire a reference outside, I switched my scan to the radar altimeter where I noted that it was falling toward 10 feet. LT SPILLMAN and I, at the same time pulled up on the collective and within seconds we were at 100 feet and 8 degrees nose-up, still backing down. During this sequence, LT SPILLMAN reported that he had vertigo and I told him of our present attitude.

The nose of the aircraft was pushed over and forward airspeed was attained. After we had attained 150 feet and 80 knots, I still felt as if we were moving backwards.

LT SPILLMAN started a starboard turn back to the survivor and the swimmer, and instructed the 1st crewman to drop two more smokes upwind of the survivor for reference points. Again, we made a manual approach to the survivor with our search light turned on, along with our hover lights. This time we did not get vertigo but a steady hover was almost impossible due to darkness and few reference points. The pickup was finally achieved by letting a considerable length of cable out and dragging it across the area for the swimmer and survivor to grab. When they were in the aircraft, we broke the hover and vectored 066⁰/5 miles to the USS TRUXTON (DLGN-35) where uneventful landing was made.

First page – not on file.
Second page;
I received a thumbs up and started to bring the hoist up. All this time I was still having to give correcting voice commands. When the feet of the swimmer and survivor left the water, our pilot was finally able to manage a stable hover. During the hoisting up we dragged the survivor and swimmer at least 10 yards before I could get them directly underneath us. I had to lower them back into the water to stop them from swinging violently.

When they were alongside the aircraft, I tried pulling the survivor in first but could not get a hold on him properly due to his inflated gear. After two futile attempts, I swung them around and reached around the swimmer and finally was able to pull them in.

I gave the cleared for forward flight, and then stowed the hoist. I talked to the survivor and found that he was in good condition and then related the information to the pilots.

We flew to the USS TRUXTON and landed safely with no problems.

CONFIDENTIAL MESSAGE: Champion 401 SAR
A resounding well done to the pilot and crew of Big Mother 60 for retrieving Champion 401 under adverse conditions. LT Spillman has once again demonstrated superb airmanship and determination that is the hallmark of the Big Mothers – signed Capt. Foley

LETTER: Dept of the Navy – Helicopter Combat Support Squadron SEVEN, NAS I.B. – Commanding Officer – To: AE-3 Curtis D. Cady – Letter of Appreciation – Your superb and highly professional performance under the trying conditions of a night, IFR, overwater mission during the successful rescue of LT Wayne T. LOTZBERG, VA-56, off the coast of North Vietnam is noted with great pleasure. As exemplified by enclosures (1) through (3), your continuing courage, expertise, and devotion to duty not only reflects very favorably on yourself, but on the command and the Naval Service. I extend my personal congratulation on a job well done. (s) D. J. McCracken