A flight of Phantoms was escorting a Blue Tree photographic reconnaissance mission near Thanh Hoa when the formation ran into heavy flak about 10 miles southwest of the city. Lt Kovaleski’s aircraft was hit by 85mm anti-aircraft shell that caused a massive fuel leak, damaged the port engine and led to electrical failure. When the remaining engine failed just as the aircraft crossed the coast the crew ejected safely and were rescued by a Navy HH-3A SAR helicopter. Lt Kovaleski had achieved fame two days earlier when he shot down a MiG-17, the 197th and last MiG shot down during the war. Phantom 153068 had shot down a MiG-19 on 18 May 1972 when flown by Lt H A Bartholomay and Lt O R Brown. It was also the last aircraft lost by the USS Midway before the carrier left TF 77 control on 12 February having spent a record 208 days on the line during its third and final tour in Southeast Asia. The Midway was decommissioned on 11 April 1992 and has since been stored at Bremerton, Washington, awaiting possible preservation at San Diego. (5) (now at San Diego) 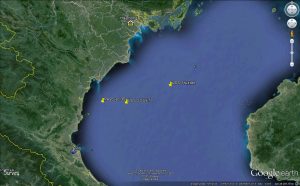 Big Mother 67 launched off the USS TRUXTON (DGLN-35) on preposition in support of ALFA Strike over North Vietnam. Under the control of USS BROOKE (DEG-1), we were notified of a SAR and given a vector to the scene. At approximately 3 miles and 500 feet altitude we sighted the pilot floating down in his chute. Once he had hit the water we made one approach over the survivor at 10 feet and 10 knots to drop a swimmer. While the swimmer freed the survivor from his harness and sank his raft, Big Mother 67 was flown to a position down wind. On a ready signal from the swimmer, the aircraft was moved under the direction of the 1st crewman. Swimmer and survivor were hoisted at the same time using the Navy snap link. Once aboard we exited the area and made an uneventful landing aboard the USS JOUETT (DLG-29).

On 14 January at 1345, big mother 67 launched off the USS Truxton on a strike support mission for the USS Midway. We were handed over en route to the USS Brooke (DEG – 1) for control, who vectored us to our SAR station.

Once on station we dropped a smoke to mark our position, set up and test fired the weapons and switched our secondary UHF to monitor the attack frequency. Copyright 10 was positioned south of us as a backup SAR asset.

At approximately 1450, the Jouett told us to standby for a possible SAR. Immediately afterwards we received a MAYDAY over guard frequency that Rock River 110 had been hit and was ejecting. His position was marked by his wingman as 305° at 21 nautical miles off channel 26 TACAN. Copyright 10 was given a vector to the scene at which time I turned inbound as well. Big mother 67 was then given a vector to which I corrected my heading. The USS Jouett informed us that both pilot and RIO were feet wet but that there were numerous fishing boats in the area.

En route I instructed the first crewman to leave the guns armed in case we encountered any resistance from the fishing boats, ordered the hoist to rigged and the 2nd crewman into his swim gear. While I flew the aircraft, the copilot, Ltjg Frazier, armed and slung an M-16 across his lap, recorded all transmissions and monitored the engine and transmission instruments.

I first sighted the area who by the A-6s overhead who were making strafing runs to discourage any fishing boats from attempting a pickup. Then at about 3 miles, I sighted copyright 10 overhead among some boats and finally the pilot who was floating down in his parachute at about 500 feet. I reported survivor in sight to the scene commander, and the crewman reported a visual on the pilot and swimmer ready for the jump.

About 300 yards out the pilot hit the water. I made a buttonhook approach to a heading of 90° to get into the wind and enable myself and the first crewman to keep an eye on the chute at this same time. At approximately 10 feet, I ordered the swimmer to jump and received a report that he was out, followed by an O.K. signal. I then flew the aircraft in a tight racetrack pattern to position it downwind from the pickup area and hovered momentarily, while the swimmer freed the pilot of his chute and punctured his raft. We moved in as he signaled ready. Within seconds, they were both hooked up and on the way to up the hoist.

Once aboard I transitioned into forward flight and turned to pick up copyright 10 in case he encountered difficulty or opposition. I sighted him visually one-quarter mile to my starboard side headed outbound. I joined on him as we headed back towards the USS Jouett.

Due to a fuel bypass warning light, I requested permission to land first aboard the USS Jouett which I did and discharged the survivor. After correcting our problem, we again launched, to allow copyright 10 to land.

On January 14th ,1973 we were on board North SAR Station (USS TRUXTON DLGN-35), to provide SAR support for Air Operations. At 13:35 flight quarters were set to launch Big Mother 67 in preparation of an Alpha Strike with a TOT of 14:10. At 13:45 Big Mother 67 was airborne and vectored to the Southwest for JOUETT’s control. We were picked up and controlled by the USS BROOKE (DEG-1). We were held on station until approximately 14:50 when we overheard LIBERTY BELL call Harbor Master over the strike frequency we were monitoring and asked for a SAR helo as one of the aircraft had been hit and was proceeding feet wet. The USS JOUETT gave us the initial vector giving a position off TACAN Channel 26 and we proceeded there at max airspeed. On the way we requested how far wet feet the downed pilots were, wind and if fishing boats were in the area. We were alerted to the fact that there were boats in the area and that there was plenty of support aircraft present should we need them. In route, LIBERTY BELL 010 vectored us and his vectors differed from the USS JOUETT’s original one by only 5 degrees and 1 mile. The first thing we spotted in the area was a jet circling low, next we heard and saw a jet strafe close to one of the fishing boats near the downed pilot. Next, we saw one of the pilots coming sown in his chute. As soon as he hit the water we flew by and dropped a swimmer and moved off while the swimmer readied the pilot and himself for the pick-up. Just as we moved off, we saw COPYRIGHT 10 who is the JOUETT’s lamps helo, over the other pilot. He made his pick-up without dropping a swimmer and we found out later, the pilot got in and was hoisted aboard wearing the horse collar backwards. Our swimmer signaled he was ready to be picked-up and we made our approach and hoisted them aboard. It had taken us approximately 15 minutes from the time we got the initial call until we had the pilot on board. On our return to USS JOUETT we got a forward fuel bypass caution light and proceeded directly to the USS JOUETT who was approximately 20 miles away and made an uneventful landing. • The only negative aspect of the SAR was that COPYRIGHT 10 was considered the primary helo and Big Mother was considered a BACK UP.

STATEMENT of 1st CREWMAN – Gaynor (3)
While on a pre-position we heard a MAYDAY and heard that the pilots had ejected. While the second crewman loaded his sixty (M-60) and got into his swim gear, I rigged the hoist and set up an M-60 in the back. The MINI GUN was already set up. When we got near the survivor I got the second crewman in the door and gave him a quick check-over. Mr. KAUTZKY, the pilot, called the drop and I tapped CADY and he exited the aircraft. He made a good water entry and gave me a thumbs up, which I reported to the pilot. • There were several small fishing junks in the area but none of them made any moves toward the pilot. • We came around in a racetrack pattern and I talked the pilot in and lowered the horse collar. I got a thumbs up from the swimmer so I talked the pilot over the swimmer. The swimmer got himself and the survivor pilot hooked up and signaled – okay. I brought them up using the high speed on the hoist. I had a little trouble getting the survivor and swimmer in the door because they were pretty heavy, but I eventually pulled them both in. We got the pilot out of his gear and made sure he wasn’t hurt and proceeded back to the USS JOUETT.

STATEMENT of 2nd CREWMAN – Cady (3)
On January 14th while on a pre-position we heard a MAYDAY around 14:50. • We set up the guns and then I put on my swim gear and at that time we were 21 miles from the scene of the SAR. • About 5 miles from the scene I was off ICS and awaiting the signal to go in. At 15:03 I went into the water. I swam to the survivor and gave him a good look over. I set him free of his raft and then sunk his raft. • I then gave the Helo thumbs up and picked up at 15:05. We then proceeded to the USS JOUETT.

(note from Cady’s “Flight/Stricke Mission Resume’” total points – 12.8 by the end of this day.)