Aboard the USS Reeves (DLG-24) on South SAR station communications (CIC) received a MAYDAY at 15:01(3). The F-8C (Old Nick 102) aircraft had finished a photographic flight along Route 1A and had been hit by automatic weapons fire. His second plane loss, three months before LT Meadows’ plane had an engine failure, requiring him to eject (12). This time he managed to get feet wet and neared the south SAR station before losing control and bailing out. (4) At 15:01 the USS Reeves is alerted to a SAR incident and stations the helo detail. (6) Clementine launched at 15:09, with visual contact, located the pilot who had ignited a day smoke. 15:19 AN Wood, (swimmer) entered the water to aid the survivor (11). A text book rescue completed and helo returned to USS Reeves at 15:29. 15:30 USS Reeves secures the helo detail. (6) 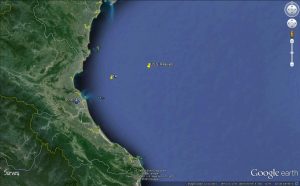