5 June, 1972, rescue (HC-7 No. 134) of two SEALS and two UDT members returning to the USS Long Beach, the flight deck was cleared of all non-essential personnel, the helo lands and the team is escorted to officer’s area for isolation, debriefing and rest. The team prepares to return to the USS Grayback. The team was emphatic about returning to the GRAYBACK. Very brief communications between Long Beach and Grayback a night cast (drop) is planned, to return the four members to the Grayback. The USS Grayback was to shine north (an infrared light). 5 June, 1972 at 23:30 hours, Big Mother had launched from Long Beach (22:58- (14)) , approaches the area for drop using an infrared receiver searching for the shine. The night was overcast, high winds, no horizon and getting worse as time passed. Big Mother’s plan was to slow to 10 knots at 40 feet. Several passes of the area were made; one light found was of a village within North Vietnam, too far west. Spotting a short burning flare, and later a strobe light, Big Mother makes an approach; water spray comes in the cargo door. Crewman Wilson, standing at the cargo door instructs the pilot that they were backing down. Pull up and try another approach. Back around, find the strobe, “DROP – DROP”, it was now 6 June, 1972 0004 hours. The helo instruments showed the drop at 40 feet at 15 knots. Moki, (SEAL) counted to one-thousand-one up to a count of three as did Lutz. ( Note: web site – National Aeronautics / Space Admin – 3 seconds fall from rest equals 144 feet). Unknown to all aboard the helo the USS Grayback had launched a second team of four. As before, their SDV’s battery had failed, all four were adrift and activated rescue signals. The signal light seen by the helo crew was that of the adrift second team. At 01:00, Big Mother 61 lands aboard the USS Duluth (LPD-6) stationed on PIRAZ. (13) USS Grayback messages inform that team one was not dropped at their position. USS Duluth sets flight quarters at 05:30, secures from flight quarters at 05:48 (13). Big Mother launches 05:50 hour for first light search, 06:09 in the area of the drop zone. All eight team members were rescued. THIS RESCUE . Big Mother 61 lands aboard USS Long Beach at 06:29 (14). All team and helo crew are ushered into the secured hangar for debrief. At 08:12, USS Long Beach sets flight quarters to launch Big Mother 61, vectored to USS KITTY HAWK, medical facilities for FN Tom Edwards and a morgue for the body of LT Dry. 08:40 USS Long Beach fires Talos missile number 1161, to starboard, 08:41 self-destructed missile. 12:10 flight quarters are set for Big Mother 60, landing at 12:22, to resume the surveillance flights for AGENTS. (14) Surveillance flights ended 19 June, 1972, no POWs had departed Hanoi Hilton. 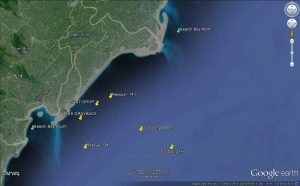 LT Melvin Spence DRY, was the last SEAL killed in action during the Vietnam War. But due to the highly classified nature of Operation Thunderhead, he would not receive official recognition of that fact. (C)

NO RESCUE REPORT 141 on file