The USS Ranger returned to TF 77 for its third war cruise on 3 December. The ship’s first combat loss occurred during a raid on a road ferry at Kien An, just south of Haiphong. Lt Cdr Hernandez and Lt Vanhorn were flying as part of the flak suppression flight. As the flight was leaving the target area, systems fail. Controlling the aircraft by rudder alone, Lt Cdr Hernandez steered the aircraft out over the sea and he and his NFO ejected. They were both picked up by a Navy SAR helicopter. LT Cdr Hernandez ejected from another Phantom over the Gulf of Tonkin in 28 April 1968. (5)

Sundown 101 (6), was flying as part of a flak suppression flight. After leaving the target area, south of Haiphong, systems failed. Controlling the aircraft with rudder alone, the crew steers out over the sea and ejects. (5) 12:38, Clementine and Big Mother (HS-6) flying in a preposition racetrack route, receive a MAYDAY (13:00 (3)) over the guard channel. (3) USS Coontz vectors the helos off the port quarter bearing 295⁰ at 8 miles. The helo crew observes survivors descending in parachutes at 13:13. Hoist operator Fleck, prepares to tap swimmer Schwake (jump signal). Pilot Melecoski flares the H-2, Fleck taps Schwake, and he jumps. Swimmer Schwake assists survivor, checking for entangled chute lines and injuries. 13:15 with the use of “D” rings, Schwake and survivor Hernandez are hoisted to safety.(3) 13:22 Coontz sets the helo detail and recovers SH-3A helo, with LTJG Van Horn, injuries none. One minute later the SH-3A is launched, 13:25 Clementine is recovered with pilot Hernandez, neck and low back injuries. 14:52 Coontz steams toward NSAR area. 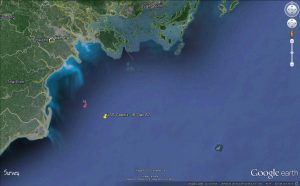