This day Ltjg Yates was the Duty SAR / Test Pilot and Ltjg Quinn was newly designated in the H-2 helicopter, at NAS Atsugi – Helicopter Combat Support Squadron SEVEN. Yates asks Quinn if he would like to sign for an aircraft to track the blades. 10:22 returning to NAS Atsugi, they hear the need for SAR, landed to take on extra fuel and launched at 10:25 for an approx. 95 mile flight south.(5) Gale force winds with gusts up to 58 mph slowed their maximum speed by 25%. (3) The “Hercules” locates Wadsworth. Geiger was rescued earlier by Japanese fishing boat and taken to Miyake Jima Island, to be picked up later by an USAF HH-43.(7) Mean while in 12-15 foot waves Wadsworth hung on to his yellow one-man raft for an hour. The C-130 dropped a white smoke which proved to be very difficult to see within the foaming whitecaps.(3)

With additional assistance provided by two USAF HH-43 helicopters and P-3A, communications were difficult due to the large number of aircraft.(11) 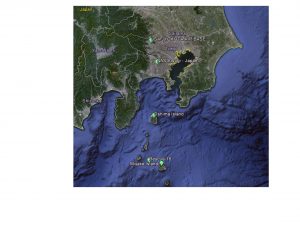 At 11:55 the helo crew locates Wadsworth and with great difficulty lowers him the rescue sling. Having a low fuel state, they depart the area at 11:56 to return to NAS Atsugi. Battling the storm they arrive at NAS Atsugi 13:10, the base flight surgeon met Wadsworth with hot coffee and dry clothes.(3)(6)

That’s about it. Gave Jim Quinn a chance to log some HAC time and he gets a good rescue. I talked him through it as I don’t think he had ever done a hoist pick-up. “Skip” Yates