Helicopter Combat Support Squadron SEVEN, Detachment 107 had a double rescue this morning. Still proud and walking high, as the sun was setting approx. 17:30, the crew relaxing. The quiet scene was interrupted at 18:31 when fight quarters was set and Clementine scrambled at 18:34 for SAR effort scene bearing approx. 174 range 78 miles. (12) During a BARCAP mission the Phantom lost complete hydraulic pressure, (5)(7) which affected the flight controls. The crew ejected when they lost all control. (5) Approximately 10 miles from the survivors the helo crew started receiving an emergency beeper. Switching to guard channel, immediately a Direction Finder (DF) steer was obtained. 19:00, five minutes pasted, one flare and two strobe lights were sighted. 19:01 Clementine crew is flying beneath the orbiting aircraft and observes the oil slick from the down phantom. Both survivors were picked up in good condition and taken to the USS Kearsarge, landing at 19:25. A brief stay aboard the carrier, then Clementine returns to the USS King, flight quarters are secured at 21:22. USS King changes course and speed to intercept USS Ponchatoula (AO-148) for refueling, 39 minutes later, lines are clear, the King now sets course to high-line cargo from USS Pollux (AKS-4). By 23:30 the King is settling back to normal NSAR conditions. A successful DAY ! 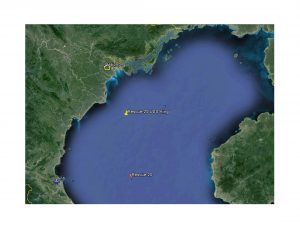