The last survivor would not get out of the small one-man life raft which was being blown away by rotor wash. The rescue crew had some difficulty in getting the rescue sling to the raft and survivor. Once the sling caught up with the survivor, he was hoisted aboard. 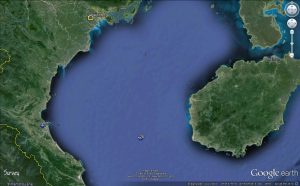 16-18 Underway as before. 16:03 maneuvering at various courses and speeds to go and remain in the area of a helicopter that has gone down. 16:32 picked up life raft from helo. Four personnel aboard, picked up by helo from Ticonderoga. 16:55 sunk wreckage of helo with small arms fire to port. 17:01 maneuvering at various courses and speeds to take station 2000 yards astern of Ticonderoga. 17:17 set flight quarters. 17:31 Helicopter over flight deck.

Lewis had just set his helicopter down aboard USS Providence, when he saw another Navy helicopter, with four persons aboard, splash into Tonkin Gulf. “All I could think about was getting my aircraft off the deck.” He ordered his passengers to remain aboard and headed for the stricken helicopter.

Lewis guided the chopper over one of the downed chopper’s crew and AE-3 Joe Feliciano lowered the sling and pulled him aboard. The other three crew were on a life raft and came aboard Lewis’ chopper the same way. Soon they were on the way to safety.