A Crusader was lost during a night BARCAP mission when it ran out of fuel. The night was very dark and stormy and Lt Brown had difficulty engaging the basket of an A-3 tanker. Eventually his flight-refueling probe hit the basket and damaged it so the Ticonderoga scrambled an A-4 with a buddy re-fueling pack as a replacement. Just as Lt Brown plugged into the tanker’s basket the A-4 pilot inadvertently disconnected him and the F-8 flamed out. Lt Brown ejected and was eventually picked up by a Navy helicopter after spending two and half days in his raft in the Gulf of Tonkin. (5)

1- Low ceiling visibility, the heavy rain and a very dark night with no horizon delayed the search and recovery. Hover by requiring mostly instrument flying and hovering.
2- Recommend that survivor keep strobe light on and held high until helo is on top. Should use flare gun only if helo is at long range.

USS DeHaven (DD-727) Deck Log 25-Feb-1968
0300 c/s to 8 knots commenced lowering superheat. Ticonderoga has stopped her engines. Maneuvering to stay close to station while searching for downed pilot. 0337 formation c/c to 035 c/s to 15 knots maneuvering to at various courses and speeds to regain station with the guide bearing 030 at 3000 yards. 0350 on station pilot recovered by Ticonderoga 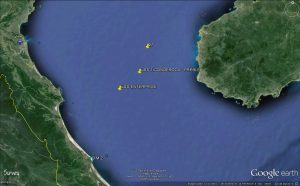