An A-6 bombardier that punched out while jinking around on a return from a mission. Apparently the aircraft departed from normal flight, the pilot ordered “bail-out”, and as the canopy separated and the NFO went out, the plane stabilized itself. And the pilot flew home without the BN, which we picked up a short time later. (4) 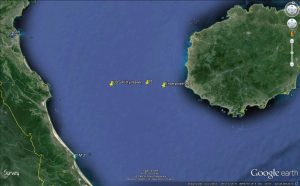 Rescuee had not made enough of an effort to get clear of parachute while in his raft; consequently, when he went into the water for pick-up he got his feet entangled in the shroud lines.

Crewman swimmer entered water without face mask, due to non-availability this detachment, and encountered problems with regards underwater sight and clearing rescuee’s legs of shroud lines. (3)

RADM – (John P. “Blackie”) Weinel – “I personally observed your CIC and AIROPS and listened to the air-sea rescue of LCDR Olson of VA-35. The whole effort from start to finish was handled in a most professional manner by all concerned. In particular, I want to comment LT LUTZ and his E2A crew for absolutely flawless performance which resulted in the quickest possible pick-up. To LT HARNDEN and his helo crew well done on the pick-up.” (5)