The RA-3Bs (Flying a Douglas Skywarrior- a photographic craft carrying 3 crewmen(10)) of VAP-61 [ The VAPPERS (10)] from Cubi Point made frequent deployments to Da Nang to fly reconnaissance missions over North Vietnam and Laos. On the 14th an aircraft was detailed to fly a daylight photographic reconnaissance along the North Vietnam coast. When the aircraft reached a point about 15 miles south of Thanh Hoa it encountered ground fire and sustained damage to the fuselage. “Quiz Show”, their call sign, crossed the coastline they radioed “Feet Wet”. It was their last transmission. LT Cdr Vaughan flew out to sea to find a SAR destroyer but the aircraft crashed off the coast. Ltjg Moser & (ADJ-2 J.G. SHAW(10)) ejected safely and were rescued by a Navy helicopter, but LT Cdr Vaughn did not survive. (5) (Body not Recovered – Panel 28E – Row 005) (12)

(6) October 14, 1967, the new HC-7 Det 104, recently HC-1 Det 9, launched their UH-2B in reaction to the “MAYDAY” transmission of a photo-reconnaissance version of the A-3 Skywarrior (called the B-66 by the Air Force). VAP-61’s RA-3B, struck by AAA fire, struggled to get feet wet. Losing altitude steadily, it was going to be a close race to get beyond the beach line before the jet ran out of altitude. They held on as long as possible, and when they dared go no lower (the plane had no ejection seats so the crew bailed out by sliding down a chute in the floor of the cockpit), Ltjg M.M. Moser and ADJ2 Shaw bailed out, while pilot LCDR Robert R. Vaughan fought the dying plane to buy them a few seconds to get clear. They made it feet wet by a scant mile and a half, thanks to the determination and skill of Vaughan at the controls. 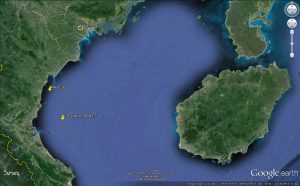 Helo pilot LT Lee Lax, co-pilot Ltjg Terry Lee Smith, 1st crewman ADJ2 Roger Clemons and 2nd crewman ADJ3 John Hultz got to the scene, just off the coast, in time to deter the many sampans surrounding the crash site from collecting Moser and Shaw. Keeping a wary eye on the hostile boats, they first picked up Moser who abandoned his raft and swam to the horsecollar with no problem. Moving to Petty Officer Shaw, who had not abandoned his raft, with a low hover, Lax was able to capture the raft in the rotor downwash, and John Hultz dropped the hoist right in Shaw’s lap. He slipped into the horsecollar and was hoisted right out of his raft into the helicopter. The sampans did not open fire on the helicopter when its arrival preempted their approach to the two men, but as Lax settled into a steady hover over Shaw, mortar rounds began to fall, reaching out for the little gray helicopter. Thankfully, Shaw was quick to get in the sling and they were away before the gunners found the range. Meanwhile, American planes made strafing and bombing runs on the boats to keep them at a distance. Numerous shell bursts struck the water in the immediate vicinity of the UH-2 as it left the area. No difficulties were encountered and the rescue was made expeditiously. However, enemy gunfire from shore emplacements remained intense during the rescue operation. (2)(3)(11)

During the war, “World Famous” VAP-61 lost five RA-3Bs, and a relieved Petty Officer Shaw confided to Clemons that this was the third time he had been picked up from one of these aircraft.

There was no sign of the aircraft ditch position, and Vaughan was not seen in the water by anyone, probably not surviving the ditching, too low to bail out himself. “Greater love….” (Hobson, p. 120) (6)