When dusk fell a section of Navy Phantoms bombed storage caves at Ben Thuy, just south of Vinh. As the leader’s aircraft was pulling up from its attack, it was hit by anti-aircraft fire. The port wing caught fire and the port engine had to be shut down. LT Cdr Hernandez headed out to sea but within a few minutes, the starboard engine also caught fire. The hydraulic system failed and the aircraft went out of control so the crew ejected close to a SAR destroyer about 15 miles (A) offshore. They were quickly rescued by a Navy helicopter. (4)(5)

At 18:45 by the ship’s SAR alarm the helo crew is alerted of a downed aircraft. 3 minutes later, directed by radarman Glenn R Newson (2), Clementine II is airborne, with a steer of 250⁰ and 23 miles. 18:40, (9) USS Jouett and USS Buckley (DD-808) change course and speed to close on the SAR area. Clementine II skims over the wave tops at maximum speed, (2) arriving on the scene at 19:02, there was no search required. With 7th fleet aircraft circling over head and each survivor displaying rescue signals, the helo crew easily spotted them. Yates radios “Both men are okay and in their life rafts.” A brief hover the first pilot hooks the hoist hook to his “D” ring and is aboard the helo. The crewman used the M-60 machine gun to sink the raft. 3 minutes later, on to the second pilot, he is aboard, the crewman again shot at the raft. But the co-pilot observes some splashes in the water, “Hey look at those flying fish,” which Yates noted to be rounds hitting the water about 30 yards from the helo. The crew stopped shooting and got the hell out of there.(6) 19:02 helo from USS Jouett has picked up both downed pilots.(9) At 19:05 the helo was departing the scene to arrive back at home base, the USS Jouett, 19:20. Returning to NSAR station the USS Jouett and USS Buckley resume patrol. (9)

The rapid pick-up was due to the speed of the helo, survivors’ knowledge of personal survival equipment and rescue procedures demonstrated by the survivors. The quick response of the ship and exact vector to the scene minimized the time required.(3)

After his return to the USA at the end of his combat tour, David Lortscher ejected from another F-4 near San Diego on 14 September 1970. He repeated the performance on 22 September 1971, again near San Diego, when the canopy of his F-4 separated. David Lortscher made aviation history on 15 October 1973 when he ejected from a Phantom for the fourth time, this time during an exchange posting with the Royal Navy. This was not the only ejection for Duke Hernandez either as he had ejected from a Phantom during a raid on Haiphong on 16 December 1967.(5) ( HC-7 rescue 15)

USS Buckley – History
After getting underway from Subic Bay, 18 April found the ship back on the South SAR Station, this time with USS JOUETT and COMDESRON ONE. Aside from 11 days of upkeep in Kaoshiung, Taiwan from 21 -31 May and a few days in transit, DENNIS. J. BUCKLEY and JOUETT steamed together for 60 days. Whenever JOUETT and DENNIS J. BUCKLEY were not engaged in a search and rescue mission, they conducted exercises and maintained a constant state of readiness for any eventuality. There were many times when the ships set general quarters in expectation of air attack. Extra watches were set when the possibility of hostile helicopter actions existed. The ship left South SAR Station on 23 June after being relieved by USS HANSON (DD-832). (7) 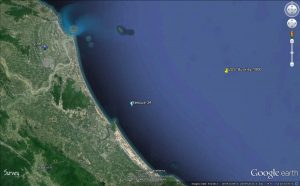 Declassified Confidential Message: Successful recovery of two naval aviators from Ranger Vf-21 resulted from smooth teamwork, readiness, and prompt reaction of all units concerned. Prompt announcement by VF-21 pilot when hit gave JOUETT flight followers early warning of SAR and allowed JOUETT to obtain accurate position on damaged aircraft. Outstanding reaction by VF-21, VAW-115 and VA-147 aircraft resulted in an early sighting of the pilots after ejecting and until they landed in the water. Thereafter VA-147 RESCAP complete reporting kept the crewman’s location pinpointed, high state of readiness of HC-7 Det 107 enabled Clementine Two to be airborne within three minutes. Coordination among all participants resulted in accurate vectors to helo and accurate positioning of USS Buckley for HIFR or gunfire suppression. Your immediate response and superb professional coordination in this emergency resulted in a total time of only twenty nine minutes from receipt of damage to on-deck recovery of rescue helo. All hands demonstrated the highest level of SAR readiness when it was needed. WELL DONE. GP-4

A)- As noted in “Air Losses” the position of the down aircraft was 15 miles off the coast.
Down aircraft data from W. Howard Plunkett – (LtCol USAF, retired) is 14 miles off the coast.
Approx. calculation from USS Buckley deck logs .. positions downed aircraft at 7 miles off the coast (shown)
Skip Yates’ letter , “½ mile off the beach near Hour Glass, (Than Hoa)”
B) Calculations of sunset on 28-Apr-1968 was at 18:14… flight was 18:45 to 19:29 and with the notation of “Flying Fish” have reclassified this rescue as – Combat Night.
C) No deck logs were available for USS Jouett (DLG-29)
D) No deck log entry – USS Ranger (CVA-61)