A section of Phantoms became engaged in a running fight with several MiGs north of Vinh during a combat air patrol. During a confused fight the normal reliable radar and jamming support failed leaving the Phantom crews blind. Lt Cdr Christensen was forced to disengage as he was running low on fuel and headed for the sea without his wingman. As he returned to straight and level flight at 8,000 feet over the coast, his aircraft was hit by an Atoll air-to-air missile fired by a MiG-21. The Phantom burst into flames and started a nose-down spiral towards the sea. Both crew ejected about five miles off the coast and were eventually rescued.(5)

An announcement over the USS Jouett’s 1MC of a SAR alert sounded at 15:34. The helo crew rushes to the flight deck and prepares to launch. The helo shuts down to wait for actual confirmation of the SAR. 6 minutes later Big Mother 71 is airborne, an estimated distance of 29 miles. At 15:56 the survivors pop a day smoke, Big Mother spots them from a quarter of a mile. 10 and 10 swimmer Lawrence is away. Utilizing the survivors “D” ring and swimmers harness, they are soon aboard the helo. Swimmer Lawrence was unaware of a second survivor and this delayed the deployment. The shore batteries were bracketing the helo as F-4s strafed the nearby Vietnamese junks.(4) With all the external activity, the No. 2 engine throttle vibrated loose which distracted the co-pilot from his duties. The hoist was sluggish, causing a 40-50 second increase in hover time. As the second survivor and swimmer were hoisted, the M-60 mount vibrated loose and swung inboard which hindered the 1st crewman’s efforts. (3) 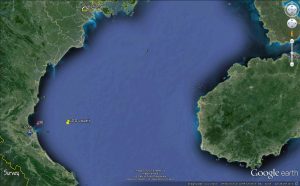 Declassified Confidential Message: The bold and prompt rescue under fire of the crew of SilverKite 210 in close proximity to enemy territory was another vivid example of the bravery and skill of our SAR helo crews and the professionalism of all of the forces supporting their efforts. Well Done to all concerned and especially to the crew of Big Mother 71. I convey the deep appreciation and admiration of all CVA airmen for your selfless dedication to their safety. A special Kudo also to the instant RESCAP, SilverKites 204/215 from Ent and Feed-Bass 110/112 from Tico whose timely help with suppressive fire made the rescue possible… RADM Horace H. EPES Jr.