During an armed reconnaissance mission, a section of Skyhawks attacked a group of trucks 12 miles south of Ha Tinh. Lt. Lawrence fired his 2.75 in. rockets and pulled up but as his aircraft was climbing through 3,500 feet, it was hit by ground fire. The engine started vibrating and the aircraft caught fire. Within seconds, the engine stopped and Lt. Lawrence was forced to eject. He was rescued by a Navy SH-3A which penetrated 20 miles inland to pick up the downed pilot. (5) 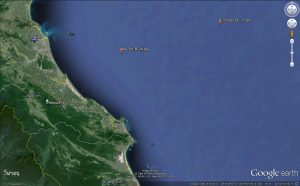 “We received a SAR alert while on the North SAR ship and proceeded until feet dry to the area where the pilot was believed to be. (the flight was long) I recall a lot of radio chatter from RESCAP while scanning the very deep and thick jungle below. The downed pilot radioed that he could hear us, then that we were closer and closer. We slowed almost to a hover (all hell broke loose) at that time still looking when the downed pilot said we were being fired upon from the right side of the aircraft and to spray the area. As I lay down several hundred rounds, the downed pilot radioed that my shell casings were falling directly on him as we were now directly above him. (helo pilot could not get his M-16 to operate, crewman showed him that the safety was on) I still had no visual; the downed pilot had left his pistol with tracers on the ship. Somehow, we had left without our forest penetrator so I attempted to lower the sling through the canopy, after a few tries it made it through. (a tie down chain was added for weight) At that point, I continued to lay down suppressive fire waiting for the downed pilot to radio that he was hooked up and ready to be hoisted. Nothing, still nothing. Finally, he yelled that he was ready to come up. Apparently, by other accounts he was pressing the wrong button instead of the transmit button. ATN2 Cullivan hoisted him up as I continued suppressive fire. When the downed pilot was clear of the canopy, I told our pilot to get out of there.” “Young crewmen “10 Feet Tall and Bullet Proof”

When he dove down to make a rocket attack on a North Vietnamese storage area May 8, Lt. Dennis A. Lawrence, a Skyhawk pilot for VA56, had no idea that within the next thirty min¬utes he was going to be as close to death as any man would want to came. After he was safely back aboard the “Big E” he had an un¬nerving story to tell:

“When I pulled up the engine started chug¬ging,” he remembered. “I started to head for the beach but soon I realized that I’d never make it. I was losing altitude, so I turned back toward the mountains. I was in a thirty degree bank when the engine flamed out.”

Another pilot was with Lawrence when he was hit and stayed over him until he was rescued. “There was a flash of fire around the aft sec¬tion of the plane just forward of the tail as¬sembly. The tail was about to wrench off, so I told Denny to eject.”

“When the plane started down,” continued Lawrence, “I was hanging in the straps, so I reached down and pulled the secondary ejection handle—that ejection is some kind of ride! I was doing cartwheels in the air, and then felt what I thought was the seat separating, and then a jolt when the chute opened. The jungle canopy was about two hundred feet be¬neath me. As I came into it my chute caught in a tree and banged me up against it. I was left hanging about five feet from the ground. I released myself and fell into a mud bank on the side of a steep hill. I started up the side of the hill when I heard a chipping noise. I went a little further and lay down beside a tree, and saw a little Vietnamese a¬bout three hundred yards away. All he had on was a light blue shirt with no sleeves, shorts, and he was swinging a machete, I had only my survival knife. He was on top of the hill and I could only make him out every so often through the trees.”
“It looked like he was heading down to where my plane was. I waited until he was gone and followed a small dry creek bed leading up to the top of the mountain.

About three quarters of the way to the top, I ran in¬to a little camp. There it was with a beauti¬ful lean-to and a died-out fire in the middle of A ten-foot clearing. Maybe it belonged to the little guy I had seen earlier, I do not know. I just made a beeline right through the camp and into the woods on the other side. There were high vines all about the trees and I kept getting caught up in them. I did not think I had a chance because I could not find an area where the helo could come to pick me up. Everywhere I looked, all I could see were trees.”

“I could hear the planes above me, but I couldn’t see a thing. I gave myself about a five per cent chance of being picked up. All of a sudden, I saw the sun coming through a spot in the jungle. There was a little hole about fifteen feet in diameter. When I got to the clear area, I just sat down. I put my feet out, put my back against the tree and

held my radio. I figured: ‘Well this is as far as I am going. I’m in a clear area. They’re either going to get me or pick me up.’ The North Vietnamese were getting closer. I could hear them hacking at the jungle a short distance away. They would not talk; they just hacked. It sounded like they were whistling back and forth. It might have been a bird but I think now that it was them, because I would hear it from one direction and then the ot¬her.” “I thought, ‘Oh God I’ve had it.’ Then, about two minutes later, I heard the helo. I could see that it was the ‘big mother’ because of the long shadow that was rippling over the trees not far away. It came right over me go¬ing about one hundred knots and I yelled through my radio, ‘Hey, you got me!’ You’re right over me!” Then I heard firing on top of the hill. They were shooting at the helo. When it came over a second time and started hovering I could hear the North Vietnamese start yelling. I asked the helo pilot if he had me in sight and I saw him nod his head, and I said, ‘Open up with the machine guns and just spray the area.’ Empty shells began to fall all around me.”

“They lowered the sling, and it kept get¬ting caught in the trees. I kept telling the helo to come right. Finally, the sling came down and blew into another tree. I grabbed it, twisted it off the tree and pulled it to me. I kept slipping down the hill, trying to hook the sling up and dropping my radio. When I finally got hooked up it was about six feet away. I wanted the helo to raise me, and I was trying to wave to him, but he would start the cable, so I tried to scramble up the hill to my radio, but the helo wash kept pushing me down.”

“I finally got the radio and told him to pull me up but he still wouldn’t. I was pres¬sing the receive button and he couldn’t hear me. It must have been a minute or so before I realized what I was doing and he started pull¬ing me up. The sling was twisted around a tree, and I just sort of went around the tree and up through the branches. When I got above the trees, it sounded like guns were going off everywhere, and I was just cringing, waiting, for a bullet to come plowing through me.” The rescue was successful. Lawrence was quickly flown back to the ship by the SAR helo.

Declassified Congratulatory Message: For the second time in two days, our SAR forces have successfully rescued a downed aircrew under hostile fire. The recovery of the pilot of Champion 406 from deep within enemy territory in an unbelievable short time was the result of the prompt, cool and professional actions of the scene commander, the RESCAP, the downed pilot and most of all the intrepid crew of Big Mother 70. You have the admiration and appreciation of all for scoring on this tough one. Well DONE. VADM Horace H. EPES Jr.