Heavily loaded with fuel, tools and equipment, a UH-2 from HC-7’s Det 105 was preparing for a ferry flight to the USS Fox (DLG-33) when an A-3B crashed in the water about a mile southwest from the end of the runway at NAS Cubi Point, R. P. Helo pilot Lt. Everett P. Bateman immediately took off and seconds later, the SEASPRITE was over the four survivors. One, who was injured, was hoisted aboard and the helicopter headed for shore to the waiting ambulance. The other survivors, who had directed the UH-2 to the injured man, were picked up by small craft. (11)

Co-pilot Ltjg Bob K. Doane had a ringside seat for what happened next:

We were loaded up and getting ready to go on station with the North SAR. These guys took off – the A-3 – and it started coming apart, pieces flying all over the place. It went off the runway and into the water. I believe they got the whole crew out; we picked up one guy, the crewman, and the Station SAR picked up the rest of the crew.

Apparently the A-3’s JATO bottles ignited at the wrong time, resulting in the accident.(2) 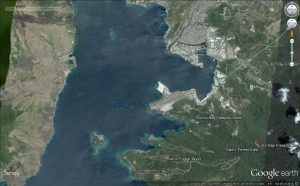