As the day began USS Wm V. Pratt (DLG-13) in the company with USS Chevalier (DD-805) proceeding from DaNang South Vietnam to south SAR, course at 331⁰ – 12 knots, to rendezvous with USS Chipola (AO-63) for fueling. At 0320 message is received from command to proceed directly to South.

As the USS King (DLG-10) on South SAR station was being relieved by USS William V. Pratt (DLG-13) each ship having a HC-7 helo detachment aboard, fight operations began. Conducting turnover briefings, between 07:12 and 09:18 12-Nov-1967, several helo exchanges took place. 09:24 the USS King is underway (10-12 knots) to their new assignment on North SAR. The weather was deteriorating fast. USS Pratt assumes the South SAR command at 09:20.

Aboard USS Pratt flight quarters and refueling detail had been secured by 09:24. The flight deck crew hadn’t time to dry or warmed up, when at 10:45 the Pratt receives a distress call, sounds SAR ALERT for a surface SAR incident, and adjusts course to 60⁰, speed to 8 knots. A sea state of 8, the south SAR ship had turned into the wind to launch their helo. The flight deck located on the lower level, on the fantail of the ship. At 10:52 the Pratt launches Clementine and immediately changes course and speed to 150⁰ – 10 knots, proceeding toward the surface SAR incident. Over the next 17 minutes, the ship changes speed to 25 knots. During a 90⁰ hard turn, it is reported to the bridge at 11:09, MAN OVERBOARD (16)

The South SAR helo (Clementine – pilot Ltjg Cullen, co-pilot Ltjg Duncan, crewman ADJ-3 Don West ) were several miles away aiding a PT boat in distress.(3)(12) The gusting winds were so heavy the South SAR helo was blown about 50 miles south. Since the USS Pratt helo was speeding to the surface SAR incident, LT Bill Berry and his crew underway to North SAR aboard USS King (DLG-10) (H-2 Clementine II) are alerted. Flight quarters set at 10:55, Clementine II launches at 11:10 for the fifth time this day, to assist in the search for a reported three persons; washed overboard on the South SAR (USS William V. Pratt (DLG-13). Lt. Bill Berry and crew in Clementine II, were 18 miles north, launched. It took a long time to turn the helo around to travel down wind. The USS King, changes course to the south at 20-27 knots to assist in the search, along with its shotgun escort USS Wiltse (DD-716)

USS Pratt begins maneuvering on various courses at various speeds to recover man overboard. It is soon reported that three men were washed over the side. The crew is mustered, to determine the absentees. 11:15 the Pratt lookouts locate a man in the water, the ship turns to place him in the lee of the storm.(16)

Clementine II, arriving at the South SAR area, raining and a sea state of 8 (30’- 40’ waves) the ship directs the helo to about 200’ off the starboard side of the ship toward one of the sailors (no survival gear(11)). Lt. Beery turned control over to LTJG Beougher. The crewman (swimmer) was ready to go, with full wet suit and gear. Berry told the crew that the waves were too large to put a swimmer in the water. As he watched the sailor in the water (11:15) having treaded water for near 30 minutes (14) and when he saw him go under the waves, he said that the swimmer should go. Berry stated they were near 100’ above the surface when Willie Smith, the swimmer, jumped. 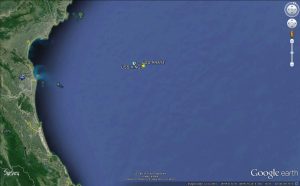 LT Berry instructs LTJG Beougher to lower down into the trough of the waves and hold a hover. That really spooked Beougher as he had no experience with this procedure. Berry had practiced this while picking up drone aircraft, off the coast of San Diego. Bill told him; “Don’t worry, just ride the waves”. Hovering 10’-15’ above the surface, Beougher never adjusting the collective.

Willie fought his way through waves to assist the sailor to the hoist and both were lifted aboard the helo. (11:20) Returning to the South SAR ship, the seas were too rough to land, AMEAN Barger was lowered by hoist to the deck (12:05). The helo being low on fuel competed in-flight refueling alongside the ship. (11)

USS King arrives at 12:40 to join the search, the captain takes the conn. Remaining upwind of the designated search vessels, the King begins maneuvering. (15) Visibility deceases to less than one mile. 12:48 USS Wiltse (DD-716) arrives to assist.

Clementine returns to the area to assist in the search, each helo completes in-flight refueling (13:44) from the USS King.(15) Clementine II helo crew searched for approximately four more hours (2)(3) for the two remaining sailors, (Shipfitter 2nd Class James D. Roark – Wall Panel 29E Row 085 ) and ( SN John David Cayce – Wall Panel 29E Row 080),(10)(11) with no success. It is believed that both ship’s crew were wearing foul weather jackets and one had a 45 strapped to his waist, this would have hindered them for survival.(14)

USS Canberra (CAG-2) and USS Collett (DD-730) arrive 14:16 to assist. Clementine departs area to USS Coral Sea (CVA-43) for maintenance during the remainder of heavy weather, due to loss of equipment from the fantail of USS Pratt. (16) USS Pratt, at 16:25, completes ballasting, due to its low fuel state and weather conditions, took on 53,000 gallons of seawater.

Clementine II, recovered aboard USS King at 15:17, ship continues search. 18:15 the search is suspended due to darkness, results negative.(16) At 18:17 USS King and its shot gun escort USS Wiltse (DD-716) secure from the search to proceed to north SAR. USS Pratt changes course and speed proceeding to refueling rendezvous with USS Chipola (AO-63).