During an armed reconnaissance mission a flight of Corsairs attacked an anti-aircraft gun site on the outskirts of the city of Vinh using their Walleye bombs. Lt Lee rolled in on the target and prepared to fire his missile but his aircraft was hit by flak before he could fire. The aircraft burst into flames as Lt Lee headed towards the coast. As the aircraft crossed the coast at 4,000 feet the hydraulics suddenly failed and the aircraft went out of control. Lt Lee ejected safely and parachuted into the sea close to the shore but was protected by other A-7s from VA-27. He was later rescued by a SH-3 SAR helicopter from HC-7. (5)

07:05 notified that an A-7 had ditched just off the beach, 60 yards from the bad guys, Clementine Two prepares to launch. USS Sterett, increased to flank speed to race to the scene. (6) Four minutes later Clementine is away, having a steer of 26 miles.(3) As the overhead A-7s strafe an approaching fishing boat, Clementine arrives on the scene. The M-60 machine gun limit stops prevent the crewman from returning fire from the intense enemy ground fire. Every movement the helo did to the left, the gun fired in the water. 07:26, the vectors from the Sterett sent the helo to the awaiting pilot. 07:30, a 20-second hover was all that was needed to snatch the pilot and hoist aboard. No swimmer entered the water, as the hostile forces were too close. Returning to the Sterett at 07:39. A grateful LT Lee received immediate medical attention. Upon post-flight inspection, the crew finds bullet hole in tail rotor. (11) 10:08 HC-7 logistics helo “Protector 70” is airborne with LT James R. Lee as a passenger to USS Constellation. (12) 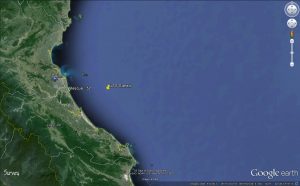 Declassified Message: “My sincere congratulations to all concerned with the fast moving SAR effort today with the rescue of the A-7 pilot. The crew of Clementine Two rates a special salute for the fast pick-up in close proximity to a small army of ANGRY BAD GUYS”. VADM Ralph W. Cousins. (2)