The CO of VA-85 set off on a night low-level attack on targets near the city of Vinh. Carrying 10 Mk36 bombs and four CBUs, the aircraft first bombed a road ferry at Linh Cam, 10 miles southeast of Vinh, before proceeding to the Ben Thuy road ferry, two miles to the southeast of the city. After it dropped CBUs on the target the aircraft started a climbing turn but was hit by a 37mm shell in the fuselage. The aircraft started to pitch and roll violently and, unable to regain control of the Intruder, the crew ejected. The aircraft crashed on a small island in the Song Ca River just to the east of Vinh and the two men came down close to the wreck but were separated. By the time the SAR helicopter arrived the rescue forces had made voice contact with Cdr Coskey who told them that he had injured his leg but would try to make his way to the wreck of the Intruder. However, when the helicopter approached the wreck it was fired at by North Vietnamese militia and had to depart after picking up Lt Cdr McKee. Cdr Coskey was captured on the island and was held as a POW until his release on 14 March 1973. He had only taken command of VA-85 on 28 June 1968 and was the Squadron’s fourth CO to be lost since 1963. (5)

SAR crew stationed on the USS HORNE… During the day, the helo crew and the CIC of the ship had practiced almost the exact procedure to be utilized later.. pre-planning. Prior familiarity with the rescue area, though updated photographs of area and charts with enemy defense sites. While on deck, during the practice seasons, pilot LT Sam Arundale, instructed the crew to build a shield for the rotation beacon, located on the tail stabilizer. The crew found a soup can, cut it in half and taped around the light. This would prevent the direct light from being seen from the ground, but visible from above or ground when in a sharp turn.

At the coast, a flak curtain appeared, helo flew through as the A-4s commenced a race track formation. The helo guided by the radio beacon, strobe light, PRC-63 radio. 22:05, Clementine 2 nears XO LtCdr Richard McKee. Multiple PRC-63 radio signals in the area, rendering the UHF/DF useless. (3) McKee uses voice commands to assist in helo positioning. Area well lighted, being a short distance south of a lighted military base. McKee in the (Song Ca) river, helo crew at 22:10 sees strobe light, pulls into hover, M-60 malfunctions, drop cable / hook. Green tracers are passing beneath the helo. 22:11, McKee hooks – up and away.

CO CDR Ken Coskey, is next to pick-up. 22:13, helo approaches the signal beacon area, helo pilot turns on spotlight, to see two North Vietnamese holding up Coskey. Helo changes direction and approaches again, receiving heavy automatic and semi automatic weapons fire (3), the helo tries another approach. The hostile fire intensifies. The inability of RESCAP to suppress fire while helo in area. (3) Appears that Coskey is dead and being used as a trap. Small arms fire intensifying, Clementine 2 heads for feet-wet, to the USS Preble. Knowing that the helo was low on fuel the USS Preble cruises into the muddy shallows. (Unknown ship as USS Preble on 6-Sep-68 was moored in San Diego)(13) Helo lands on the deck at 22:32. Disappointment that Coskey was not rescued. Arundale and McKee proceed to CIC for de-brief, while LTJG Wassmer, Grubbs and Johnson search the helo for damage. None found. Now time to be scared. Noted that the small arms fire appeared as a strobe light at night. Also the rescuee’s knowledge of equipment aided in his rescue considerably.

Remarks: multiple PRC–63, rendering our UHF/DF useless. Heavy automatic and semi- automatic weapons fire. Inability of RESCAP to suppress fire while helo in area. Poor radio discipline. Small arms fire giving the same appearance as strobe lights at night. Aircrewman training at Para Medic School at Cubi Point. Briefings given by helo crews aboard carriers as to techniques of combat rescue. Cone around upper rotating beacon, allowing the helo to be seen from above and only while at angles of bank from the ground. Prior familiarity with the rescue area through updated photographs of area and charts with enemy defense sites located. 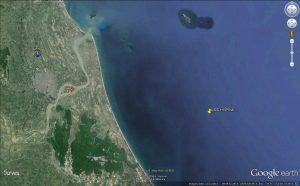 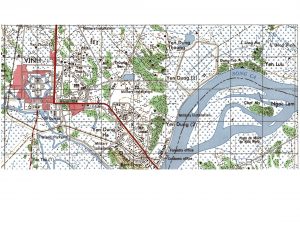 Note: Until this conversation, Doug Wassmer, didn’t realize that CDR Coskey was captured and became a POW, released March 14, 1973.

Declassified Message: Helo Rescue – The courageous actions of the crew of Clem 2 on 6 Sep and the astute judgment of those involved in decision making during the successful rescue of the Bombardier/Navigator of Buckeye 506 are another magnificent example of the dedication and dependability of our SAR forces. It is reassuring to note the can do attitude and the consistently outstanding performance of this small but vital part of the Seventh Fleet. WELL DONE to all concerned. VADM William F. Bringle.