A section of Crusaders on a BARCAP mission engaged a number of Mig-21s near Vinh. After a long, indecisive engagement, Lt Cdr Red Isaacks and Lt Swigart had to break away from the fight when their fuel began to run low. The pair climbed towards the coast to rendezvous with a tanker for the return flight to the Hancock. However, minutes later the engine of Lt Swigart’s Crusader flamed out due to fuel starvation and the pilot ejected, coming down in the sea five miles from the island of Hon Nieu off the coast near Vinh. A SAR helicopter later picked him up safely. LT Swigart was killed in a ramp strike accident on 4 February 1969. (5) (F-8-H 147919 ) (5) 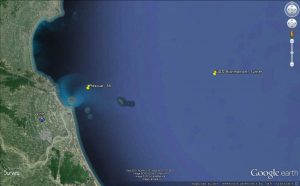