A Rolling Thunder strike on the Tam Da railway bypass 11 miles north of Vinh resulted in the loss of one of the raiders. Lt Wright was pulling up from his attack on the target when his aircraft was hit by 37mm flak as it climbed through 4,000 feet. The aircraft began to stream fuel and a large hole was observed near the port wing root. The engine flamed out just as the aircraft crossed the coast and Lt Wright ejected a few miles offshore. He was rescued by a Navy SH-3 under the protection of a flight of A-7s and returned safely to his carrier. (5)

USS Richmond K. Turner , cruising with USS Isbell (DD-869) on south SAR station, the day begins with the arrival of Big Mother 75 at 07:31. Between 09:05 and 16:27 twice USS Turner receives a small boat from USS Isbell and launches Big Mother 75 three times, to recover “Protector 45” helo. With Big Mother 75 in flight at 16:27, Protector takes the deck. 16:32 the SAR alert is sounded aboard the Turner, Big Mother 75 is notified via UHF radio and given a steer of 35 miles, at 16:34. RESCAP failed to give position on initial call. Several minutes were lost waiting for a position; the immediate problem was fire from shore batteries, inland 1.5 miles. Big Mother crew locates the survivor’s chute, a quick flare the swimmer is dropped. Leaving the area, the helo drops smoke for a diversion, the swimmer prepare the survivor. 16:50 the pick-up is happening, but because of rescue hook twists, inverts and the pair drop. The swimmer and survivor are snatched up a second time and are aboard the helo. 16:56 all headed to the USS Turner. 17:12 Big Mother is on deck. After a medical checkup, dry clothes, 18:45 Big Mother launches with survivor to transfer him to USS Hancock. (3)(12)

RESCAP was unable to suppress the fire until after the rescue was affected. (3)

“Honors Heaped High in Helo Awards Ceremony Monday” March 25, 1969, “ADJ-3 Robert R. Reichard, whose actions in September 1968 saved the life of an F-8 (A-4F) pilot under heavy fire in the Gulf of Tonkin, was presented the Silver Star. ADJ3 Reichard leapt into the gulf under heavy enemy fire and as the rescue “Big Mother” helicopter moved off to draw fire, he prepared the pilot for pickup. On the second pass, and after already taking a hit the pilot, LT Mike Trinnich, maneuvered the helicopter over both Reichard and the survivor and completed the pickup. LT Trinnich was awarded the Distinguished Flying Cross for his actions. Reichard received a Purple Heart in addition to the Silver Star for injuries he sustained during the rescue effort.” (6) 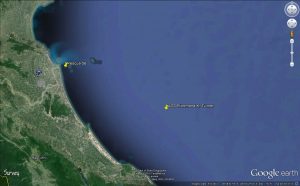 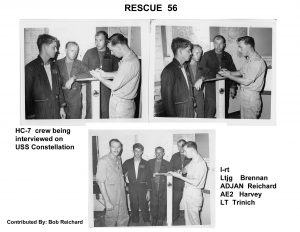