Maj Ross and Capt. Hobbs, call sign “Academic” returning from a photographic reconnaissance mission at Bac Giang, when a SAM exploded just underneath his aircraft, immediately headed towards the coast, he and his navigator ejected.(5)

Remarks: trained crewman was put in water to aid survivor. He made sure pilot was free from parachute before attaching rescue sling. 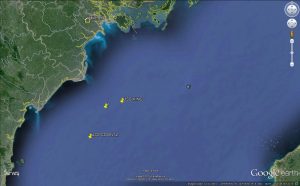 Notes from Rescue Report: an UH-2B in the area, Pilot (ROSS) had no “D” ring, used horse-collar sling.(3)

Historian Note: The HC-7 rescue log indicates that two persons were rescued. This is incorrect as shown within the Det 108 report and the USS KING’s deck logs. ONE RESCUE by HC-7