During the salvage operations of the aground USS Clarke County (LST-601), the MARS is anchored off CAP MIA, Republic of South Vietnam, within the hostile fire zone.(9) During vert-rep operations which began at 06:35, at 14:00 helo #51, receives a radio message, 2 mile flight, helo crew locates SP/4 Diemert, afloat on air mattress, off the coast of Duc Pho, South Vietnam.(3) He was recovered from the ocean because he was unable to swim back to shore.(9) 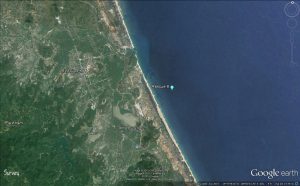