Shortly after the Phantom was shot down, the Navy lost another aircraft during a Proud Deep strike on Yen Dung near Vinh. A formation of Intruders, Corsairs and Phantoms from the Constellation crossed the coast eight miles north of Vinh at 12,000 feet en route to the target. Because cloud covered the target area it was planned for an Intruder to lead the other aircraft to the target as a pathfinder and locate the target by radar. The Intruder would drop its bombs in straight and level flight above the clouds, as would the accompanying Corsairs and Phantoms. Unfortunately, this tactic put aircraft at great risk from SAMs and radar-directed AAA. Lt Cdr Holmes was approaching the target when a SAM shot up through the cloud layer 6,000 feet below the aircraft and exploded just in front of it. The aircraft became engulfed in flames and the starboard wing separated. The NFO, Lt Burton, and possibly the pilot were ejected unintentionally by the breakup of the aircraft. Lt Burton survived, albeit badly injured (broken left heel, broken right leg, and arm burns) (7) and was rescued by a Navy helicopter from the sea near Hon Nieu Island off the coast near Vinh. Enemy boats were kept at bay by the Corsairs and Phantoms, which made several strafing runs near the survivor. However, although one of the SAR crew reported seeing another man in the water there was no sign of Lt Cdr Holmes who probably did not survive the ejection. Due to the presence of a large number of small boats in the area, the SAR helicopter could not stay long to investigate. (5)

Ron, here’s what I pulled together about the Spillman rescue (it didn’t take the citations when I copied it just now, but there are 13 including the newspaper article, Orphans of the 7th Fleet by Morgan, e-mails with Spillman, Hobson. etc:

On December 26, 1971, President Nixon ordered a limited air campaign against fuel and supply depots, airfields, SAM sites, and truck parks in North Vietnam below the 20th parallel. The brief campaign was to register displeasure to the buildup of SAM and MiG activity in the southern province of North Vietnam. While the United States had been withdrawing, the buildup portended North Vietnamese hostile intentions following the looming U.S. withdrawal. The Navy and the Air Force went back to bombing North Vietnam after having flown only reconnaissance flights over it since the end of Operation Rolling Thunder October 30, 1068. On the last of the five days of what was called Operation Proud Deep, December 30, 1971, the Navy lost two planes attacking targets in the Vinh area. They could blame the weather for it. It was the Monsoon season and the Vinh target area was under a solid overcast making it impossible to see the telltale smoke of an SA-2 lifting off. Without a visual on an approaching SAM to gage its path and time the SAM break, evasion was much more difficult as the two Navy planes found out. With the approaching missile in sight, the pilot had to wait until it was close. Break too early and the missile had time and space to adjust and follow in a curving intercept. Break too late, and you were, well, too late. While the SA-2 missile was deadly, its kill rate was low. In 1965 it was taking about 18 missiles fired to bring down a plane. In 1972 it would take almost 60 fired for each kill. If the pilot could see the missile launch and approach, evasion, while exhilarating, was probably going to be successful.

A VF-111 F-4B off USS Coral Sea (CVA-43) was hit by an SA-2 SAM emerging through the overcast, and the pilot, Lieutenant Commander David Hoffman, turned his dying Phantom toward the coast, just barely getting feet wet before losing control. He and his RIO, Lieutenant Junior Grade Norris Charles, ejected safely, but were quickly captured by North Vietnamese boats before rescue forces could arrive at the scene. They became the first Navy airmen to be captured in North Vietnam since September 1968, three years and three months earlier, just before the end of Rolling Thunder.

Shortly afterward, an A-6 Intruder from USS Constellation (CVA-64) was also hit by a SAM coming up through that same dangerous overcast, the missile blowing off the starboard wing. (10:35) (12) The VA-165 crew escaped from the cartwheeling plane, and came down feet wet a few hundred yards from the heavily defended Hon Niew Island, a few miles out to sea from the coast abreast of Vinh. Two Big Mothers from HC-7 Det 110, staging from USS Denver (LPD-9) [HC-7 Historian, note; – USS Denver was moored in Sasebo, Japan (13) ] steaming in company with the South SAR DLG and its shotgun, raced to the scene, keenly aware of what had just happened to Hoffman and Charles. Approaching Hon Niew, the helicopters began to take fire from the weapons sited on the island. Several small boats and junks could be seen moving ominously toward the rescue scene. One of the HH-3As, piloted by Lieutenant Frank Pinegar, spotted what they thought was one of the pilots in the water, and raced the boats to the spot, descending to a low hover, jumping the swimmer as the helicopter slowed to less than ten knots and dropped below ten feet. Swimmer away, Pinegar accelerated away to attract the fire of the enemy gunners ashore, weaving to confuse their aim.

A short distance from Pinegar, Lieutenant Jim Spillman, pilot of the other Big Mother, had also spotted a chute in the water only a mile from the island, and performed his own ten-and-ten, deploying AMS3 Timothy Smith next to it. Smith found a badly injured bombardier, Lieutenant Charles Burton, and prepared him for pickup. Spillman’s copilot, Lieutenant Junior Grade Ken Lowe, eyed the North Vietnamese boats who threatened to interrupt the rescue and capture the airmen. He identified the nearest ones to the RESCAP, and a pair of A-7 Corsairs from Constellation strafed these boats and held them at bay while the rescue effort continued.

Meanwhile, Pinegar had been weaving around diverting the attention of the guns on the island from his swimmer, keeping a watchful eye on him for the pickup signal. It was quick to come, and Pinegar returned to the spot, and hoisted his swimmer up from a cluster of debris which had been mistaken by them all for a man in the water. As the hoist reached the cabin door, the hoist cable parted and deposited the rescue swimmer back into the water. Pinegar immediately lowered the helicopter to an open-ocean water landing next to the swimmer, and the second crewman in the cabin pulled the swimmer into the cabin through the cargo door. Pinegar made a vertical takeoff from the ocean and cleared the area, dodging columns of water from coast artillery and tracers from automatic weapons. A large track-mounted gun rolled out from a cave on Hon Niew was especially noticed by the Navy crewmen.

Spillman’s recovery of Petty Officer Smith and Lieutenant Burton was less troublesome (10:53) (12) , his hoist working perfectly, but his departure was just as dramatic as shells raised huge columns of water and tracers reached out for them from shore. In the helicopter, AO3 Joe Hilyer treated the broken left heel, the broken right leg, and the burnt arms of Charles Burton. ³You¹re beautiful people!² (11) exclaimed Burton to Hilyer.

As the helicopters continued to search for the A-6 pilot, RESCAP Corsairs bombed and strafed and chased the tracked gun back into its cave, whose entrance was plastered. ³The A-7s blew the hell out of that cave,² recalled Spillman. ³ It looked great!² Despite a frantic search as more and more Vietnamese boats gathered, no one could find any sign of Lieutenant Commander Fredrick Holmes, and it was not believed he had survived the ejection. Finally forced from the area by the many boats, the Big Mothers retired with their prize.

The Big Mothers were back in business. After 39 months of no combat action, but constant training to maintain a high state of readiness, the rescue was a great morale boost for HC-7, particularly the officers and men of Det 110. All agreed it was a fine way to start the New Year. There was much more that would come with the New Year 1972. (8) 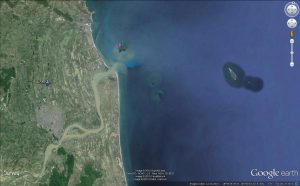