Another CO of a Corsair squadron was shot down following Cdr Frenzi’s escape on 8 March. A section of Corsairs was flying near Dong Hoi on a road reconnaissance mission when a volley of six SAMs was fired at the aircraft. One of the missiles damaged the tail of Cdr Gilfry’s aircraft, which caught fire. He managed to steer his stricken aircraft out over the sea and ejected about 15 miles north of Dong Hoi when the aircraft’s hydraulic system failed. He was rescued by a Navy HH-3A SAR helicopter. (5)

Statement of pilot Lockett (6) (with inserts)

USS Ouellet (De 1077) located at south SAR station, at 12:04 secured from pumping fuel to Big Mother #60, helo departed. (11) There was a lot of “SAM” activity going on over the air, sometimes so much we couldn’t hear each other over ICS. (6b) At approximately 12:10H, we had just finished in-flight refueling (HIFR) from the Ouellet (Grand Opening) (6a) , we heard a distress call over guard frequency from the wingman of the downed pilot, the wingman reported the downed pilot’s position as 300 for 100 miles of Pawtucket’s “tacan”. Navy co-pilot LTJG LILES had control of the aircraft at this time; so I immediately switched my tacan to “Pawtucket” and held our position to be on “Pawtucket’s” 300 at 75 miles. Afterward, I took control of the aircraft and told my co-pilot to monitor the radios.

The Ouellet was notified that we were heading 300. We asked them to update our steer. At this point a lot of confusion commenced and three incorrect vectors were dismissed. While en route AE3 Ankeny got into his swim gear and ADJ2 Nielsen started setting up the mini-gun, but the feeder-delinker was jammed. He then put an M-60 in its place and one in the personnel door; plus two M-16s in the cockpit. (6a)

Approximately, 20 miles out from (DE 1077) an updated vector verified our course to be good. We were also notified of an unidentified, low-flying plane was at our 10 O’clock position, my co-pilot “rogered” this transmission. We continued our course for approximately five more miles and was able to identify the circling plane as a friendly A-7 aircraft. DE 1077 switched us from “helo common” to SAR primary and the circling A-7 gave us a new heading of 250. We turned to 250; about two minutes later I spotted the survivor at 2 O’clock , one-fourth of a mile.

The crewmen had been notified to be standing by. The swimmer was ready to go into the water, but I elected to hold the swimmer. An approach was made to the survivor. He had seen the helicopter and was exiting his raft. He popped a smoke and I realized my first approach was down-wind even though the sea state was completely calm. (6) We tried to make the pick up without the use of the swimmer, but the rotor wash kept blowing the survivor away. We then dropped the swimmer (30 feet from survivor) (6c) and departed for another approach. I made a quick 180 and back in a hover over the survivor. I also realized on this approach that the helo was too heavy to establish a 40 ft. hover, so, I lowered my altitude to get max performance in ground-effect and dropped the swimmer.

I broke hover and (halfway through the turn) (6b) received a thumbs up from Ankney (swimmer). I direct Liles to dump 1000 lbs. of fuel on my subsequence circle and approach. We were heavy and almost pulling max torque in the previous hover so we dumped down to 1900 lbs. of fuel before making the second approach. (6a) Once in a hover over the survivor and swimmer the horse collar was dropped and Ankeny used the quick snap “D” rings to hook-up both himself and the survivor. Nielsen hoisted them into the helo and we departed for Redcrown. The survivor was in excellent condition. (6a)

Once the survivor was spotted the entire retrieval phase took approximately five minutes. The success of this mission should be contributed to the well-trained and professional attitude of my crew. (6)

It took approximately 5 Minutes to complete the rescue after the survivor was spotted. There was some confusion during the rescue but the crewmen handled the job like the professionals they are. (6a) 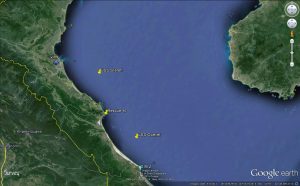