The 334th TFS and 336th TFS had deployed from the 4th TFW, Seymour-Johnson AFB, North Carolina to Ubon on attachment to the Wolfpack on 11 and 12 April. The first aircraft lost by the newly-arrived squadrons was shot down by a SAM during a Freedom Train mission near Thanh Hoa. The aircraft was egressing from its target at 20,500 feet when it was damaged by the explosion of a missile. Capt Brown turned out to sea and he and his WSO ejected about 25 miles southeast of Thanh Hoa. They were both picked up by a Navy HH-3A SAR helicopter. (5)

Statement of Big Mother Pilot (6) – (with inserts of crew)

USS Denver (LPD-9) at 08:27 lands two H-3 helos, 61 & 65. At 09:20, both helos launch to take their assigned prepositions. (12) On the morning of 21 April, 1972, we were prepositioned overhead of the USS Denver (LPD-9) for airstrikes over North Vietnam. At approximately 09:40 we heard Mayday calls, and it was apparent that an aircraft had been hit. We then heard a call of “two chutes”, and a position using latitude and longitude was given. My co-pilot was flying so I plotted the position on our flack charts and determined that we were in a good position for a recovery I called the controlling authority on the USS Denver and relayed this information. After about four minutes, (delay in getting clearance to penetrate) (3) we were given permission to go and were told that RESCAP aircraft were overhead. The position was approximately three miles NNE of Hon Me Island and about five miles off the mainland. I flew the aircraft at forty feet and 120 knots and commenced jinking when Hon Me came into view. ADJ-3 Robison prepared the Mini-Gun for firing while, ADJ-2 Frazier got into his swimming gear. (6a) We had been briefed earlier that in addition to coastal defense guns, Hon Me had AAA sites which had previously fired on aircraft. My co-pilot sighted one survivor in orange raft at about one mile and about that time, we were receiving radio directions from the survivors who were about 300 yards apart. 09:58, we dropped the swimmer at 10’/10 knots ( 10-20 feet from aviator) (6c) and proceeded to the second survivor. Frazier said “Good morning, sir. How do you feel?” he answered, “Fine. No Problems” The first crewman said the survivor was out of the water. When the survivor was about half¬way up it was observed that he was in the sling wrong and still had his raft attached to his survival vest. He slipped out of the horse collar and fell into the water. The swimmer was ready with the first survivor so I departed and picked up the first survivor and the swimmer. The swimmer’s only problem was the guard on the rescue hook was hard to open when hands and hook are wet, and the survivor’s life vest too large for sling. (3)(6c) 10:05, I then returned to the first survivor who had detached his raft and entered the sling properly. Time a factor due to proximity of HON ME Island and known enemy gun emplacements. (3) When he was aboard, I had the crewmen check both survivors which was excellent, and we left for the USS Denver, landing at 10:20, the survivors were taken to sickbay for “Red Carpet” (11) examinations. (6)

Although we expected enemy opposition, we didn’t get any. The only thing we saw during the whole evolution was one junk while we were en route to the area. (6a) 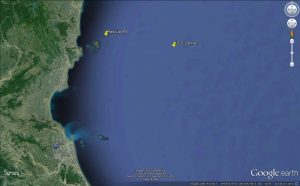 The swift recovery of two USAF airmen from waters off North Vietnam this morning was a demonstration of outstanding teamwork and proficiency by USS Denver controllers and the Big Mother 61 crew. Personal congratulations and well done to USS Denver and to Pilots Pinegar and Kennedy and air crewmen Frazier and Robison. RADM Rembrandt C. Robinson.