The ever-increasing threat from SA-2s resulted in a lot of emphasis being put on Iron Hand strikes by both the Navy and the Air Force. An A-7 was lost on an Iron Hand mission on the 1st during an attack on a SAM site near Van Loc, 12 miles northwest of Dong Hoi. Lt Surdyk was maneuvering to avoid a missile at 14,000 feet when an SA-2 exploded about 250 feet below his aircraft. The aircraft’s electrical system failed instantly and a few minutes later Lt Surdyk lost control just after he crossed the coast. He was quickly rescued by a Navy HH-3A SAR helicopter. (5)

Statement of pilot Spillman (with inserts of crewmen comments)

While en route we set up the mini-gun and dumped some fuel because we were extremely heavy and a hover at that weight and temperature could have been difficult. We received an up to date vector from the controller on the USS Denver as we proceeded to the scene.

The On-Scene Commander was the downed pilot’s wingman Hoboken 405. When we arrived in the area, numerous small junks were present, and at one time, I thought I had the survivor located, only to find out that it was a small boat. At no time did we have communications with the survivor, nor did we hear a beeper signal. At approximately two miles from the beach, I fell in trail behind Big Mother 61. At that moment, we received a vector from Hoboken 405 putting the survivor directly behind my aircraft. I immediately reversed course and spotted a red distress flare deploying at which time I had my swimmer and a smoke standing by.

My first approach was an attempt to deploy the swimmer and smoke, but the swimmer was not completely ready to jump, so only a smoke was dropped near the survivor. On my second pass, the swimmer was deployed in the standard 10′ and 10 knots fashion after which I made one 360
degree turn at 100′ before returning to pick up area. Once over the survivor and at an altitude of 40′, Big Mother 65 came under fire from nearby shore batteries. Six to eight rounds bracketed our helicopter during the rescue, with some of the rounds landing close; around 25 yards away. Once the survivor and swimmer were clear of the water, I departed my hover and headed northeast (13:28).

(Ankney) – The pilot commanded a standby with a MK-25 smoke. We were on the second approach of the survivor. I reported, “standing by with smoke.” At this time, the 2nd crewman left the M-60 to put on the rest of his gear. We flared to a slow speed and I dropped the flare about 50 FT. from the survivor. We then started our 2nd approach and our swimmer was ready for the jump. We approached the survivor up wind, flared, and dropped our swimmer: It was a good water entry (from an altitude of 20 FT.) and proceeded on our third approach. I was keeping an eye on the survivor, at the same time rigging the hoist. At the completion of half-the race track pattern, I was preparing the hoist and ready for the pick-up. The swimmer had already given the signal that he was ready. I hadn’t seen it, but, I assumed be was ready and so informed the We immediately headed for the survivor, flared and was in a good hover over the swimmer and survivor.

I had approximately 35 FT. of cable run out and grouped in my hand. Before we were in the final 50 yards. I dropped the horse collar and it landed within 20 FT of the swimmer. The survivor and swimmer swam for the hoist. At this time we drifted forward about 30 FT. during this time I started to have problems with my ICS button on the hoist handle. I had a hard time trying to give directions to the pilot. Within 15 seconds, the survivor and swimmer had the horse collar and were preparing for the pick-up.

The rotor wash had blown the survivor and swimmer back about 50 FT. from under the hoist. I had about 80 FT. of cable out so they wouldn’t have to fight the cable while hooking up, because of their drifting. About the time, they reached the collar we started to take fire. Between 6-9 rounds landed within 25-50 yards from us. Immediately, we broke hover and headed out of the area. The survivor and swimmer were swinging severely back and forth on the hoist cable. I had to stop hoisting several times to stop the oscillation. By the time they were even with the cargo door they were steady and it was no problem getting them inside the aircraft.

We strapped in the pilot, gave him some water, and informed the pilot he was OK.

We were on our way back to the USS Denver, at the same time we cleared the weapons and prepared for landing. It was a very fast pick-up with no problems, except we would have spent less time in the hover in I didn’t have trouble with my ICS. In my opinion, excellent flying on the pilots part, and the swimmers actions were very cool and expeditious.

(Spillman) Once the survivor was safely aboard (13:38) I joined with Big Mother 61, who was orbiting nearby and returned to the USS Denver. (13:55) – Once aboard the helicopter the survivor’s condition was found to be excellent.

(Baird) We approached the survivor and dropped a 15-minute smoke. We came back around and I went into the water. I gave the “Thumbs up” and the bird flew off. I started swimming for the chute and raft when I heard yelling. I turned around and the survivor was behind me about 20 feet floating in his LPA. I swam to him and asked what condition he was in. He said he felt fine and wasn’t injured. He appeared to be in good condition and was very calm and collected. I grabbed his “D” ring and by this time the aircraft was approaching for the pick-up. I gave a “Thumbs up” that I was ready. As they hovered over I had no problem retrieving the hoist with the horse collar, I snapped the pilot’s “D” ring to the line, and had a very difficult time snapping myself.

At this moment I heard small arms fire and an instant later I heard an explosion and saw a water spout and felt a slight concussion. The explosion came from about 20 yards away from us. By this time I still hadn’t been able to snap myself to the hook so I jumped into the horse collar and immediately gave a ” Thumbs up “. I heard several more explosions around us in the water. We were immediately hoisted out of the water and as we cleared, the bird started to fly away. As we were being raised up the cable we were swinging violently, but the crewman managed to stop it from swinging and we were brought up to the cargo door.

The first crewman had no problem pulling the pilot into the aircraft and I pulled myself in right behind him. We then set the pilot into the front seat and I took my position at the M-60 at the personnel door. We were then heading for the USS Denver, which was 25 or 30 miles away.
We radioed, the pilot was in good condition and landed aboard the USS Denver. Big Mother 61 had flown back-up the whole time.

While I was in the water, I lost one of my fins. This occurred while I was dragging the pilot toward the horse collar. While we were dangling from the hoist just after clearing the water I also heard several very close explosions. I think a lot of time would have been saved if we world do away with the hooks presently being used on. the hoist cables and go back to the old Navy style hooks. Because of the rotor-wash I couldn’t see the hook while trying to snap to it and it can’t be opened by feel alone in the short few seconds needed. It’s very difficult to open it with one hand. 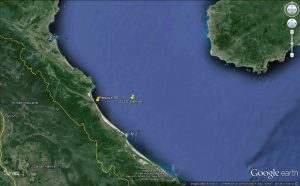