Seconds after Cdr Blackburn’s aircraft was shot down another of the Constellation’s Phantoms ran into trouble. Lt Cunningham and Lt Driscoll were in the flak suppression flight on the Hai Duong raid and had just released their cluster bombs when they were attacked by two Mig-17s. The MiGs overshot and Lt Cunningham fired a Sidewinder that destroyed one of the enemy aircraft. By this time there were several groups of MiG-17s, MiG-19s and MiG-21s in the air near Haiphong and it was obvious that the VPAF had launched an all-out effort against the raid. Lt Cunningham and his wingman dived into a group of eight MiGs that were attacking three other Phantoms of VF-96. With his second Sidewinder Cunningham shot down another MiG-17 that was on the trail of Cdr Dwight Timm’s Phantom. As four Mig-21s dived on Cunningham he evaded and headed for the coast. On the way out he spotted another MiG-17 and decided to attack it. What followed was one of the most famous dogfights of the entire war with the aircraft and crews equally matched in performance and skill. After a series of vertical rolling scissors manoeuvers Cunningham fired a Sidewinder that hit the MiG which then dived into the ground. This third kill of the mission made Randy Cunningham and Willie Driscoll the first ‘aces’ of the Vietnam War as they had previously shot down two MiGs on 19 January and 8 May. What is more the fifth MiG was thought to have been flown by a pilot known to the Americans as “Colonel Tomb” who had built up an enviable reputation in the skies over North Vietnam.

Cunningham and Driscoll had little time to celebrate their new ‘ace’ status. They headed out towards the coast passing several more MiGs but as they approached Nam Dinh climbing through 16,000 feet their aircraft was damaged by an explosion from an SA-2 missile. Shrapnel peppered the rear underside of the fuselage and the starboard wing tip was blown off. At first, the aircraft appeared to be flying normally but soon afterwards the hydraulics started to fail. The aircraft pitched nose up and Cunningham flew along or several minutes causing the aircraft to alternately climb and dive as he rolled it using rudder and throttle. In this manner, they reached the coast but the aircraft was on fire and started to spin. Unable to pull out of the spin Cunningham and Driscoll ejected about five miles out to sea. The pair were soon rescued by HH-3A Sea King helicopters from HC-7 and were taken to the USS Okinawa. The incident is described in detail in Cunningham’s book “Fox Two”. (5) 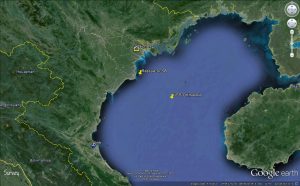 Statement of LT Thomas R. Kautzky (with inserts of co-pilot and crewmen)

On 10 May 1972, at 13:55 BIG MOTHER 65 launched from the USS OKINAWA (LPH-3) on a preposition in accompaniment with BIG MOTHER 62 and 61. BIG MOTHER 65 was positioned at location, 330/25 off channel 25 at approximately 14:10. We held communications with the ship and other helos, on SAR communication, and were monitoring the attack frequently. At about 14:15 we heard a call on attack frequency of a punch out right over the target area.

Minutes later we hear another call of an ejection giving TACAN range and bearing off channel 26. RESCAP (JASON 301) reported the survivors feet wet on guard and switched SAR common. Since BIG MOTHER 62 in communication with Red Crown / Harbor Master secured permission to head in. While en route we received an erroneous steer from Red Crown giving the survivor’s location 210 degrees at 15 NM off channel 20. Following this updated information we headed south after only a few minutes the vector was again corrected with the original information off channel 26. We proceeded directly following one mile behind 62. JASON 301 directed as to a scud trail which we followed into the search area. Transit was done at 200’ and 130 KTS. The No. UHF was switched to 282.8 just prior to arrival at the scene. RESCAP called out “Do you see them, do you see them straight ahead”. At which time I saw the first smoke and began slowing. The survivors were reported to be 300 yards apart initially so I anticipated moving north, as 62 began his approach to the smoke. At that time, I called for the second man to pop his smoke, which he did, but it lasted only seconds (a night flare). We approached the survivor in a 10-nose high flare still …(illegible)…( Driscoll – As our airspeed was 130 knots when we spotted the second survivor we were unable to slow down enough and overshot him by 50 yards. LT KAUTZKY did a 180 and began his approach to a hover. During the approach 62 called we were downwind, I added power and LT LAUTZKY waved off.)…… survivor being picked up by 62 and gave me a signal. I told him that was the wrong survivor and that ……(illegible)…, under the nose of the aircraft. Just at that time 62 called ……(illegible)….approach at which time I beeped the nose over pulled max torque and kicked right rudder. We settled to 5 feet on the radar altimeter and came around again. I elected not to drop a swimmer since the survivor was reported in excellent shape. The rescue hoist was lowered and the crewman reported that it functioned only in manual override position; with the assistance of the second crewman he positioned the helo over the survivor who left his raft but did not puncture and sink it. I kept attention focused on the raft while trying to maintain a hover.
The crewman reported a delay in hooking up because the survivor had disconnected one end of the rescue sling and hooked his harness to that end. Swimmer McCann prepared to jump, but the second attempt to hook up was successful. McCann returned to hoist duty. The survivor was lowered back into the water and correctly hooked himself up to the sling. It took the efforts of both crewman to get him aboard due to the use of manual override. We departed the area immediately since BIG MOTHER 61 was circling 62 who was still making the pickup on the second man. 15:00 aboard USS OKINAWA.