When the Linebacker I strikes commenced on the 10th armed reconnaissance flights over North Vietnam were also restarted. A flight of Corsairs on a road reconnaissance mission found and attacked an anti-aircraft gun position 20 miles northwest of Dong Hoi. As Cdr Wilkinson was on his fifth pass his aircraft was hit by 37mm AAA and caught fire. A fuel tank had been holed and the pilot turned towards the coast and ejected about five miles offshore just three minutes after the aircraft had been hit. The pilot was soon rescued by a Navy HH-3A. Cdr Wilkinson had taken command of VA-147 on 4 February and survived the war only to be lost during a routine sortie off the Philippines on 29 January 1973. (5)

Curry – At approximately 07:20 BIG MOTHER 64 launched from USS KITTY HAWK to go to the USS STERETT for SAR standby. On the way we made our normal security checks. I checked the mini-gun battery charge and also timed the mini-gun. The hoist hydraulic fail light, I noticed, was on the entire flight to the STERETT, which I reported to the pilot.

After a 0.8 hour flight from the KITTY HAWK we landed on the STERETT. The pilots went to CIC to check on the strikes going in for the day and when we would be prepositioned. When they got back they said we wouldn’t be going until 14:00. About 10 minutes later they called back to the flight deck and stated that the strikes were rescheduled and that they would be going into flight quarters in about 5 minutes.

Spillman – On the morning of 17 May 1972, BIG MOTHER 64 was launched at 09:45 H (09:56 (12) )from the deck of the USS STERETT (DLG-31) for the purpose of propositioning during an Alfa Strike which was to occur at approximately 10:05 H. Shortly after the launch, I instructed my crewmen to prepare the weapons and arm¬ament.

Once established at a position 240/10 miles of the STERETT, we dropped a MK25 smoke to check the winds, and test fired the weapons. Curry- The M-60s worked good, the mini-gun malfunctioned, so I cleared it and tried to figure out what was wrong. Spillman – At 10:15 H, I received instructions from the STERETT to switch to “Pawtuckets” primary attack frequency. We switched and immediately realized an aircraft was down and a SAR effort was in progress. Unable to contact either the USS STERETT or a Rescap aircraft, I switched back to SAR Primary in order to receive a vector to the downed pilot and other pertinent information. The STERETT passed to us an initial vector of 180 degrees/65 miles. Wright – At this time, we heard BIG MOTHER 63 launch from the USS DENVER which was nearby. Approximately five minutes after we received up dated vectors to the rescue area, (launched 10:17 (13) ) we spotted BIG MOTHER 63 who was eight miles further south. However shortly after “63” had received a steer to the survivor’s location, the DENVER’s air controller told her to return to “home plate”. It was quite apparent that the pilot in command of BIG MOTHER 63 couldn’t believe he had been asked to go back and when he inquired as to WHY…..the DENVER air controller replied that he was passing instructions from the Officer of the Deck (10:35 landed (13) ) . BIG MOTHER 63 returned as directed, refueled and was subsequently re-launched (10:39 launched (13) ). ( Big Mother recovered aboard DENVER at 11:05 (13) )

While en-route, I attempted numerous times to contact the STERETT without success. We switched to SAR Secondary (282.8) and contacted the On-Scene-Commander – Busy Bee 305, who diverted to our area. He picked us up at 30 miles from the scene and escorted us the entire distance. Upon reaching the area, I observed numerous rounds exploding in the water approximately 11/2 miles offshore. Having not sighted the survivor as yet, I requested a vector from the On-Scene-Commander orbiting overhead. He directed toward the area of the hostile fire, at which time I spotted a red distress flare and oil slick. Wright – As we approached the coast, we could see SAMs being fired at the RESCAP aircraft while nearby shore batteries sprayed the survivor’s general vicinity with heavy artillery.

I in¬formed my crew of his position and told the swimmer to standby. Curry- as we got closer the shells kept coming. Spillman- Approaching the survivor on a heading of 160 degrees, I gave the command “Swimmer Away”, upon reaching an altitude of 10 feet and approximately 15 knots. The swim¬mer gave a thumbs up to the first crewman, AT3 CURRY, and swam towards the………illegable….. Curry – the 4 jets overhead rolled in on the gun sites to try and suppress the fire.

Before making my second approach, I informed the on-Commander that I would be extremely vulnerable to enemy fire during the approach and when established in a stable hover. He agreed and attempted to coordinate his bombing runs on the shore batteries with my approach to the survivor. As I placed the aircraft to stop above the swimmer and survivor, a round struck the water approximately 20 yards in front of the helo, another hit approximately 30 yards on the starboard side. Having a difficult time with my first crewman’s instructions, as he directed me over the downed pilot, I had my Co-pilot, LT WRIGHT, turn the radio volume down. As the guns bracketed the helicopter my first crewman continued to inform me of the progress of the swimmer, as he prepared the survivor for the pickup.

Curry- As we flared I threw the hoist cable out. It hit the water about 10 feet away from the men in the water. As the pilot leveled the helo the cable turned to be too short. I started letting more out. Meanwhile we started drifting. The hook was in the water once more and I gave the dire ctions to the pilot to correct for the drifting.

Upon receiving the signal “survivor clear of the water,” I proceeded to move forward as the first crewman continued to hoist the survivor and swimmer aboard. Curry – A couple more rounds splashed around us and as we left the pickup spot the shore batteries must have got the bead because they hit the spot we had just left.

As the first crewman, AT3 CURRY, pulled the two inside the aircraft, (helo banking to the left) assisted by the third crewman, A01 KUEHL, the hoist cable snapped, 3 inches above the hook. Wright – Both would have fallen back into the water, had it not been for the timely reactions of first crewman AT3 Curry and third crewman AO1 Kuehl. 10:50 – Fortunately, the survivor and swimmer were safely inside the helo when this unexpected incident occurred.

I turned the aircraft towards the east, as artillery fire continued to land sporadically around the helicopter. While en route to the USS CONSTELLATION, survivor was checked for injuries by the first crewman, who reported the pilot was slightly shaken but otherwise in good shape. A “Sun King” E-2 aircraft contacted us on SAR Secondary and had us switch to War-chief Strike. We monitored this frequency during our return flight to the USS CONSTELLATION. Upon 11:20 arrival at CONSTELLATION, survivor disembarked, helo crew hot refueled and headed to USS KITTY HAWK. 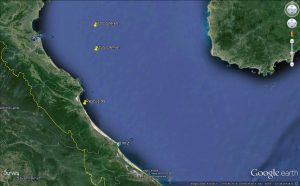 Prior to arriving at the survivor’s location, the downed pilot had come under intense fire from nearby shore batteries. This fire was continuous throughout the entire rescue operation. The survivor’s survival radio failed to operate, at a time when such equipment is considered invaluable in directing the helo to the downed pilot (the battery was corroded).

“At three miles I started to pick up splashes from the guns. When we were over him it seemed like an eternity. As we hovered at 30 feet the shells started bracketing us – first one on our nose, another to starboard and on the other side,” Spillman (7)