On a NATOPS check flight, the helo crew heard a distress beeper, proceeded in the direction of the beeper and contacted another aircraft in the area an F-4 was down 9 miles southeast of San Clemente Island and one of the survivors had already been picked up by another H-3 nearby (LT Snakenburg). Upon reaching this crash scene the crew spotted the survivor.(3) Survivor was aboard fishing vessel. Swimmer dropped close, swimmer-towed survivor clear of vessel for pickup. Effected the rescue and took him to El Toro Marine Corps Air Station for medical observation. (3) 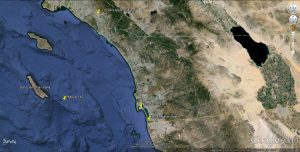