During a strike on a road bridge at Trang Song, 15 miles north of Vinh, one of the stacking Skyhawks was hit by automatic weapons fire. The aircraft began to trail flames from the rear fuselage and the controls started to stiffen. Lt Douglas headed out to sea and gained altitude but about 10 miles from the coast the hydraulic system failed completely and the pilot lost control. Lt Douglas ejected safely and was rescued by a Navy helicopter.

While conducting a racetrack flight path, in a pre-position area, Big Mother receive notification of a SAR over the UHF/Guard channel at 16:40. USS Halsey provides a vector of 060⁰, 12 miles from its location and calculates Big Mother at 26 miles from the scene. 16:51, the helo crew locates the overhead wingman and one minute later finds the survivor hanging onto his PK-2 raft. Crew observed that the survivor’s chute was clear by 35 feet, 10-10 dropped the rescue swimmer, with mask and fins, to assist. Fly past and back around to hover over the pair for a hoist pick-up. Entry into the aircraft hatch was difficult due to the position and construction of the aft M-60 mount. The aft station ICS became intermittent and broken during the retrieval. (3) 16:53 Big Mother exits the area en-route to USS Halsey then arriving at 17:09 on to USS Bon Homme Richard.

“In less than an hour, just as advertised” Douglas said, “I can’t say enough for the ejection and the rescue team” (4) 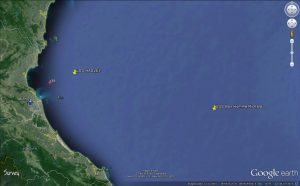