Lt Cdr Thomas and his flight was on a Iron Hand mission when Lt Miller’s Crusader was shot down. He was directed to take his flight to Vinh and provide RESCAP for any rescue that might be attempted. As he flew just to the east of the city at 3,200 feet, his Skyhawk was hit in the wing root by flak. Lt Cdr Thomas headed out to sea with his aircraft on fire, all his cockpit warning lights flashing and his fuel dropping rapidly indicating a massive fuel leak. Eventually the fire burned through the wing spar and the wing separated from the fuselage at which point Lt Cdr Thomas ejected. He was picked up by a Navy SAR helicopter. (5) 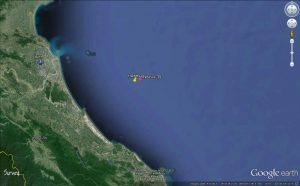 USS Halsey and USS Hanson (DD-832) providing SAR coverage at the south SAR station. Shuttling between SH-3A helo “Big Mother” on deck and UH-2A “Clementine” in hangar with the logistic helo “Protector” flight quarters were busy all afternoon. 14:49 Clementine remained on deck. At 16:05 Halsey sets SAR alert. (11) 16:12 Clementine launches and awaits steer to SAR scene. 16:48 Clementine receives confirmation of SAR in progress. 16:55 USS Halsey transmits vector to helo. USS Halsey observes pilot in the water, bearing 077⁰ at 2.4 miles, Clementine uses the data quickly sights the parachute and initiates the rescue. 17:04 Clementine returning to Halsey to lands at 17:07. Remaining on deck for 23 minutes, Clementine launches to clear the deck for Big Mother No. 72. 17:42, Big Mother has LCDR Thomas aboard and lifts off for USS Bon Homme Richard. 17:50 Clementine is recovered, and the ship secures from SAR alert… A GREAT DAY ! (3)(11)